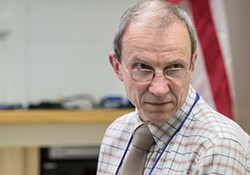 Larcombe sent his resignation letter to Collins this morning, writing, "It is with intense sadness at the loss of what might have been, and what might be ahead, that I send you the attached letter." Collins forwarded his resignation to the board shortly afterward.

Larcombe, who could not be immediately reached for comment, did not cite specific reasons, but his letter suggests he'll leave on less-than amicable terms with both the board and the city administration. "In recent months I have witnessed the School Board and City government going in a direction that I believe represents serious risk for the District (my opinion, I recognize) and adopting a manner that is not collaborative."


Like Collins, Larcombe has been in the middle of the controversy over the school district's budgeting problems, which produced repeated deficits in recent years. The district has also failed to properly pay payroll taxes, for which it's facing fines from the Internal Revenue Service.

During recent board meetings, Larcombe has expressed frustration with board members who have criticized a lack of "accountability" in the school's financial system. He has repeatedly remarked that "from day one," he was completely transparent with the board about the state of the district's finances.

Patrick Halladay, the board chair, could not be immediately reached for comment.