Updated at 4:05 p.m.: Later Wednesday afternoon, the House voted 129-6 in favor of the compromise. It now goes to the Senate.

As he made the case against banning handheld cellphone use while driving, Gov. Peter Shumlin said, "You can't legislate common sense."

Soon after House and Senate conferees signed off on a compromise ban Wednesday afternoon, Shumlin dropped his long-held opposition to the measure. He was swayed, it appears, by a face-saving amendment preventing points from being assessed on those caught violating the ban.

"Gov. Shumlin wanted to ensure the bill made sense for Vermont, wouldn't increase Vermonters’ insurance rates or harm their driving records," spokeswoman Sue Allen said in a written statement. "He appreciated the legislature's willingness to compromise on this bill, and expects to sign it."

First, the House and Senate will have to approve the compromise, which also delays its implementation from July until October and mandates a public education campaign to spread awareness of the new law. 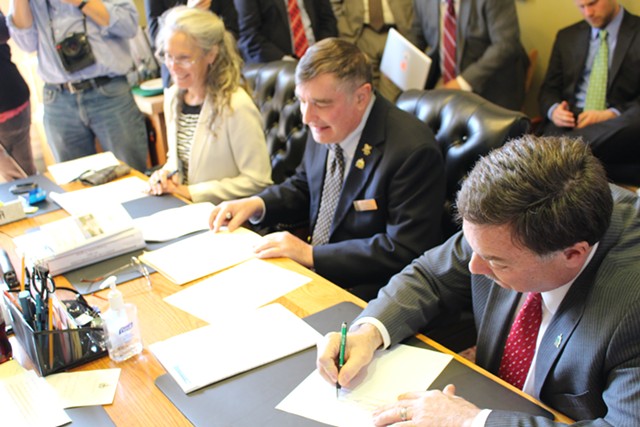 The resolution puts to an end an unusual clash between two veteran senators, both of whom often serve as loyal deputies to Shumlin.

Sen. Dick Mazza (D-Grand Isle), who had previously opposed the bill, breathed new life into it in January, when he made it a priority of the Senate Transportation Committee, which he chairs. Opposing it was Sen. Dick Sears (D-Bennington), who bottled up the legislation in his Senate Judiciary Committee — even after the House overwhelmingly approved it in February.

After being left for dead, the ban was resurrected last week when the House appended it to an unrelated bill making changes to the Department of Motor Vehicles. Though the Senate was poised to pass it outright on Monday, its members agreed to send the proposed legislation to conference committee, so that a compromise more palatable to the governor could be forged.

Though Shumlin could have vetoed the bill, his veto quite likely would have been overridden.

On Wednesday, Rep. David Potter (D-Rutland) told his fellow conferees that the House would prefer to assess points on those who violate the ban — in part so that the penalty is the same as for those caught texting while driving. (Anyone under 18 or driving in work zones would still face two points under the compromise.)

"Who's ever going to admit they were texting, and how do you sort of prove that?" he asked.

But Potter said his fellow negotiators could live with the compromise. And even Sears called it "a much better bill than what we were confronted with earlier in the session" — though he declined to sign off on it.

Both he and Mazza made clear that, though their fight was bitter, they harbored no hard feelings.

"Sen. Sears and I are still friends," Mazza told those gathered for the conference committee meeting.

His colleague echoed the point.

"Sen. Mazza and I remain friends," Sears said. "But I don't know when he's going to take some little road project away."

After signing off on the compromise, Mazza joked, "I'll go up there and get the governor's signature."