Burlington Mayor, Councilors Call for Superintendent to Step Down | Off Message

Burlington Mayor, Councilors Call for Superintendent to Step Down 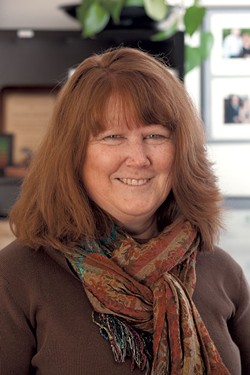 Burlington Mayor Miro Weinberger and several city councilors are calling for Superintendent Jeanne Collins to step down after a rash of financial missteps that have led to consecutive deficits in the Burlington School District and an anticipated fine from the Internal Revenue Service.

Collins sat in the back of Contois Auditorium during Monday's city council meeting, listening as councilors Max Tracy (P-Ward 2), Dave Hartnett (D-Ward 4) and Vince Brennan (P-Ward 3) each demanded “new leadership” within the school district’s administration. When it came time for him to speak, the mayor also called for "a change in school administration leadership."

"For the good of our children, the teachers and the schools, it is important that this trust be repaired quickly before lasting damage to the system is done," Weinberger read from a statement. The mayor characterized a change in leadership as an "early and essential step" in that effort.

The recent discovery that the district was on pace to overspend by $2.5 million in both fiscal years 2014 and 2015 sent the school board scrambling to recalculate a 2015 budget that would not have a deficit essentially built into it. To avoid that, the board is facing the awkward situation of having to ask Burlington voters to approve a budget that is higher than the one they voted down last March. It's also awaiting word from the IRS, which plans to penalize the district for failing to pay some of its payroll taxes.

After the meeting, those calling for "a change in leadership" got more specific about what they meant. The mayor's chief of staff, Mike Kanarick, said Weinberger thought "at a minimum, the superintendent" should be replaced. Hartnett said he felt the departure of both Collins and the district's finance director, David Larcombe, would be necessary in order to restore Burlington residents' confidence in the district. Tracy said he had been referring to Collins in his earlier comments about leadership change.

Collins' contract is in effect through the spring of 2015, but Tracy said he thinks "if enough public pressure is levied, Jeanne would see it was in the best interests of the district" to cut her term short, voluntarily.

So far, however, Collins doesn't appear to be caving to the pressure. In an email after the meeting, she wrote, "I disagree with the mayor about replacing leadership. This is not the time to change leadership. I personally am committed to continuing to do my job and do what is best for the schools and all of our students." Collins said she hopes the school board backs her, and in a different email circulated to board members on Sunday, she made a case for why they should. "Despite many comments to the contrary, the district does have its finances under control and is poised in the very near future to be in the black, running efficiently," Collins told the board.

She also took some credit for recent improvements in fiscal controls. "Thanks to the support of the finance committee over recent years, I was able to bring in new expertise and a new software system that will allow us to identify a potential deficit before the end of the fiscal year, with time to respond, rather than several months after the fiscal year ended, as has been the case in the prior two years. Because the previous school board supported my request to bring in a new software system, a new CFO and better financial policies over the last two years, we now are able to identify where we are financially."

The superintendent has weathered bouts of controversy before, overcoming criticism just two years ago for the way she handled allegations of racism within the schools. But this marks the first time the city's mayor has asked Collins to step down.

Not surprisingly, school board leaders withheld public judgment. Board chair Patrick Halladay and finance chair Miriam Stoll declined to respond on the basis that it was a personnel matter. In March, the Burlington Free Press reported that the school board had failed to evaluate Collins — one of its oversight duties — according to a prescribed schedule.

City councilors praised the work of school board members in rectifying the budgeting errors of years past, but they also took a step on Monday that suggests they don’t have full faith in the board’s ability to right the ship.

In what Councilor Kurt Wright (R-Ward 4) described as “a partnership, not a takeover,” the council passed a resolution, in a 12 to 1 vote, that bolsters its school budgeting oversight. Currently the school board doesn’t need the council’s approval to bring a budget before voters, but the resolution asks the charter change committee to explore the possibility of making that a requirement, noting that it was prior to 2004.

The resolution also “strongly urges” the school board to accept the Weinberger administration’s proposal to immediately install its chief administrative officer, Bob Rusten, as the school department’s financial administrator for the next two fiscal years.

The resolution cites “repeated unanticipated deficits, dramatic increase in property taxes, problematic payroll tax payments to the IRS, and other leadership failures” as reasons for the new “partnership.”

Halladay responded in diplomatic but noncommittal fashion. The board chair said he knew of several members who would “welcome the relationship,” but, he continued, “I don’t know what level of oversight the board would be comfortable with.” Halladay said he's aware the board has to “hustle” to restore the public’s confidence, but he expressed reservations about “rushing” into a relationship with the city.

Rachel Siegel (P-Ward 3), the lone dissenting vote against the resolution, said she feared the relationship “will politicize the school board in a way that will not help Burlington’s children.”

Councilor Sharon Bushor (I-Ward 1) said she was concerned about Rusten being spread too thin. “I have a lot of confidence in Bob, I really do,” she said. “However there’s only one Bob and we also need Bob to serve the city, so I’m concerned we’ll be diluting Bob’s time.”

Weinberger and Rusten reassured the council that they would “restructure” resources to make sure the city’s financial affairs wouldn’t be neglected under the new arrangement.