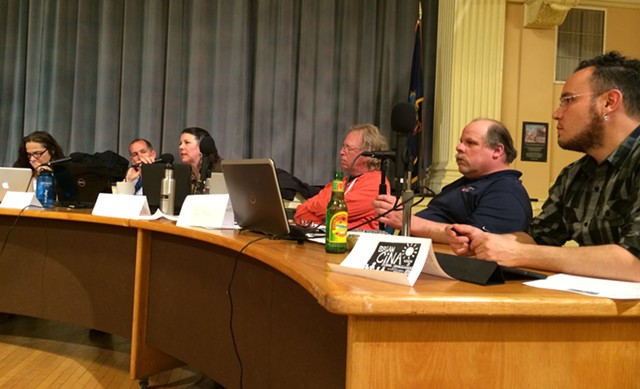 A beleaguered but nearly unified Burlington School Board approved a $67.4 million budget Thursday evening — its second offering after voters struck down a $66.9 million version on Town Meeting Day.

It’s scheduled to go before voters on June 3.*

In the meantime, board members have some explaining to do. The new budget is higher than the previous budget that was soundly rejected for being too costly, and it contains bigger cuts than the original.

That’s because the board recently discovered the earlier budget had been calculated based on "bad numbers," as school board member Kyle Dodson phrased it, that would have put Burlington on pace to end fiscal year 2015 with a $2.5 million deficit. This news came after a recent audit, which also estimated that the district will end FY 2014 with a $2.5 million deficit, making it the third year in a row that it’s overspent.

The problem, according to the audit, was that the administration was drawing up budgets based on the previous year’s projected budget rather than the actual spending that occurred. It was, in the words of the new finance committee chair, Miriam Stoll, a “shocking” discovery.

And it wasn’t the only setback: The Internal Revenue Service is threatening to fine the district for improperly calculating payroll taxes, and there is a disagreement about whether the district is legally entitled to a pot of money it’s received from the city of Burlington for years. The 2015 budget counts on $1.4 million in expected revenue from payment-in-lieu-of-taxes funds that the schools receive from the city’s public utilities and other entities. But the city administration has raised concerns that the payment, while authorized by the city charter, conflicts with the state’s education finance law.

“We are trying to do the best thing we can in a difficult situation,” Stoll said, declaring the new proposal “a budget that’s based on reality.”

The good news for taxpayers is that the Vermont House of Representatives reduced the anticipated state property tax rate — which is driven by school spending statewide — from seven cents to four cents. That rate isn’t set in stone — the Senate hasn’t weighed in yet — but using the new figure, board members estimate that the new budget will increase property taxes by 6.5 percent, not  9.9 percent, as the original budget proposed.

The 2014 deficit won’t be addressed this year, but the board did have to recalculate the 2015 budget to avoid overspending. The new budget includes a net total of $1.2 million in cuts. The cuts include 20 para-educator positions ($500,000), three Spanish teachers at the elementary- and middle-school level ($240,000) and 3.6 Burlington high school teachers ($300,000). The board also opted to eliminate $120,000 in subsidies for students’ bus fare, $150,000 in professional development programs and $100,00 in professional services. (Some new expenditures, including several teaching positions, were added to the new budget.)

On Thursday, the board decided to go further and trimmed another estimated $220,000 by making a 1.5 percent cut across seven different areas of the budget. At the last minute, it also rescued a Positive Behavioral Intervention Support coach, who helps run a program aimed at minimizing disruptive behavior in the classroom.

If the $67.4 million budget fails to pass, the default budget, based on last year’s spending, kicks in. The price tag on that one is $66.7 million, and it comes with a 4.7 percent tax increase.

The school board also pledged to begin putting “controls” in place to increase oversight of the administration’s budgeting and to prevent any further overspending. As it attempts to convince residents that the district’s finances are back on track, the commissioners do have one advantage: Most of them are new, which could make it easier to convince people that they’ll do things differently.

In fact, the board will get even newer in the next few months: Two veteran board members, Keith Pillsbury and Meredith Woodward King, recently announced they plan to resign. Pillsbury, who has served on the school board for nearly two decades, has not given a reason for his departure. Woodward King said she and her family plan to leave the area. In a Facebook post announcing the news, she stressed that her decision "has NOTHING to do with the current school district/board issues.”

Going forward, eight of the board's 14 members will be rookies.

Only two board members, Scot Shumski and David Kirk, voted against the budget, on the grounds that the cuts should go deeper. Despite his dissenting vote, Shumski noted, “I’m convinced that this school board is rising from the ashes.”

A number of residents attended the Thursday night meeting and delivered scathing rebukes of the state of financial affairs. Much of their ire was directed at superintendent Jeanne Collins and the board for its failure to hold her administration accountable for its miscalculations and missteps. And while the board itself appeared unified, several commissioners publicly expressed their concerns about the administration’s inability to provide them with proper budget figures.
Update 4/25/14: An earlier version of this story incorrectly stated that the Burlington City Council had to approve the school budget before it goes to the voters.