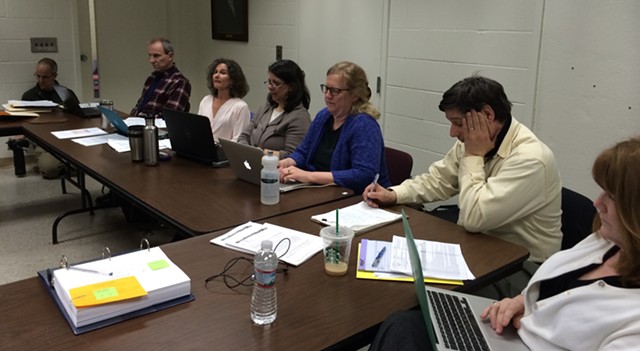 When Burlington voters struck down the school budget on Town Meeting Day, the school board was saddled with the unenviable task of trimming it back. Since then, things have gone downhill.

The board is hoping to rally support for a pared-down budget, which is still being developed and is scheduled to go before voters in early June. But several revelations along the way have threatened to undermine residents’ confidence in the school budget’s stewards.

Last week it was the results of an independent audit that exposed a flaw with board’s method for drawing up school budgets, leading to sizeable deficits during the past three years. It turns out, rather than devising a new budget based on the actual spending during the prior year, the board has been using the prior year’s budget as its baseline.

The budget that voters rejected in March would have led Burlington to rack up another $2.5 million deficit in Fiscal Year 2015. The district is already on track to spend $2.5 million more than was allotted in the FY 2014 budget. Miriam Stoll, chair of the finance committee, described the findings as “a very shocking thing to think about.”

Then came the news, broken by the Burlington Free Press Wednesday afternoon, that the Internal Revenue Service (IRS) is poised to penalize the district for failing to report payroll taxes on time. In an interview with the Free Press, finance director David Larcombe cited as part of the problem the school’s transition to new payroll software.
The school board’s finance committee has drawn up a list of potential cuts — supplemented with suggestions from superintendent Jeanne Collins — which it discussed for more than four hours on Wednesday night.

At the end of Collins’ list was an anomalous line item: a request for additional funds. The reason? To “Access Communications services in order to be transparent with a clear and concise message to tell the District story,” Collins wrote in her memo.

“I feel, particularly in light of our current difficulties,” Collins explained to school board members on Wednesday, “that it is essential.”

Damage control, in other words.

Collins clarified that she’s not recommending a new position; instead, the district would contract services when needed.

“I still don’t have confidence in our financial system as a district,” Scott Shumski, a newly elected member from Ward 4, said Wednesday. He can’t be convinced the district won’t continue to overspend, Shumski said, unless the board puts in place some “fiscal controls.”

A small audience sat watching as committee members first discussed the bungled budgeting process and then lobbied for or against various cuts. In total, their list contained roughly $2 million in reductions from the originally proposed FY 2015 budget. Among options are scaling back an initiative to provide students with laptops, reducing professional development work, and trimming the budget for sports and other “cocurricular” activities, including music and drama. The full list is available online.

Board members said they’ve worked hard to minimize the number of teacher and staff positions that could get placed on the chopping block. That wasn’t much consolation, however, to two young teachers at Champlain Elementary, who are not yet in the clear.

Maggie Rosewell, a kindergarten teacher, and Jeannine Cozzens, who teaches first grade, observed Wednesday’s meeting with impatience. Both have held their jobs for only about a year, which puts them at the front of the line if the board does decide to eliminate teaching positions. Rosewell, a University of Vermont grad, said she returned to Burlington after teaching in Oakland, Calif., primarily for her position. “I’d always wanted to be a teacher in Burlington," she said, "because I’ve seen how awesome the schools are and how good the teachers are and well they are run.”

Rosewell and Cozzens have no desire to leave Champlain — or Burlington — but, as the board deliberates, both say they've starting assembling job applications. Right now, the pickings are slim — “There’s literally four jobs posted for the entire state,” according to Rosewell. More openings should pop up in May, after teachers have signed contracts for the next year, but that could be cutting it close for Rosewell and Cozzens, who don't want to leave unless they have to.