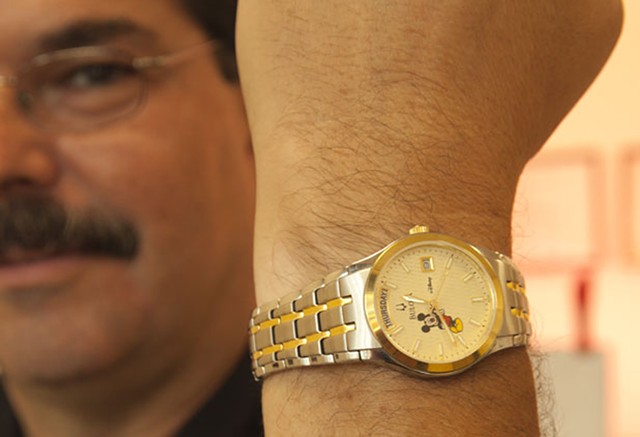 Winooski Police Chief Steve McQueen is leaving his job in September, after serving the Onion City for 30 years.

"I'm going to retire to Disney World," said McQueen, whose office is littered with Magic Kingdom posters, knick knacks and a calendar. You don't have to be a detective to realize he's dead serious.

Specifically, McQueen plans to spend his golden years driving the van that shuttles prospective buyers into Disney World's timeshare program — of which he has been a longtime member — around the Orlando facility.

"I just want to do something for the fun of it for a while; that's the whole idea," McQueen said. "If I don't get away from what I've been doing for 36 years, I'll get sucked back in, and I want to let go."


As Seven Days documented in 2012 , McQueen, 54, first visited Disney World in 1974 and has gone back every year since 1982. He and his wife, Josie, honeymooned there and have subsequently embarked on multiple Disney cruises. The spare bedroom of their Essex home is filled with Disney memorabilia.

When the couple relocates, Josie will work as a makeup artist in a shop that transforms little girls into princesses, according to McQueen.

McQueen, who has served as Winooski's top cop for 18 years, doesn't plan to leave town until next spring. After he quits the police department, he'll take on a special assignment from Winooski City Manager Katherine Decarreau to rewrite the city's outdated, sprawling and often conflicting ordinances, some of which haven't been examined for decades.

McQueen, whose family has been in Winooski for generations, said he has witnessed the Onion City's dramatic transformation from a hard-edge burg reeling from the collapse of the woolen mills to a city with a diverse population and a growing number of trendy bars and restaurants.

"It was pretty wild, actually," McQueen said of his early days in the department. "They'd be duking it out and hitting each other with two by fours. If you weren't getting into a bar fight on a Friday night, you were hiding."

McQueen is credited with lobbying for alternative justice programs, well before many state lawmakers and larger communities started touting their virtues. Specifically, McQueen has been a strong advocate of the Winooski's reparative justice program and the department's tight partnership with the Winooski Community Justice Center.

"His legacy is his focus on reparative justice and our ability to deal with minor crimes and violations in a restorative way," Decarreau said. "That's going to live on, and that's a huge deal to our city."

As for McQueen's retirement plan, Decarreau said, "I think it's great. Being a police chief...it's exhausting. So I think it's a well deserved rest."