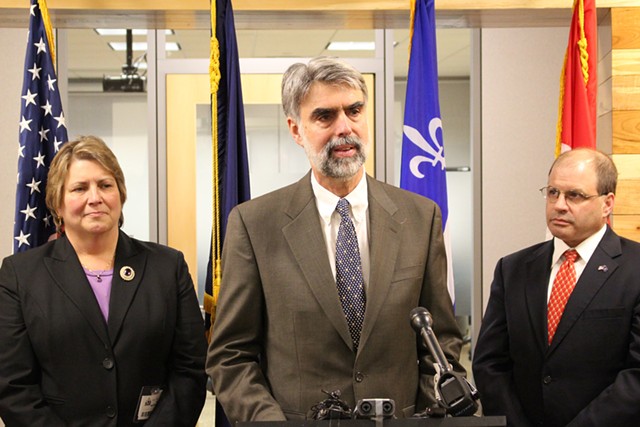 Lawrence Miller, a former business executive who spent more than three years as Shumlin’s secretary of commerce, will become senior advisor to the governor and “chief of health care reform.”

Replacing Miller at the helm of the Agency of Commerce and Community Development will be Patricia Moulton Powden, a former deputy secretary and longtime state government official.

“The governor felt that, since he’s so serious about getting universal, publicly financed health care in place here in Vermont as quickly as we can, that we needed to strengthen out team,” Secretary of Administration Jeb Spaulding said Thursday afternoon at a Montpelier press conference at the agency’s National Life Building headquarters.

Spaulding said that while many in the administration are involved in various aspects of health care reform, “We actually needed to have a quarterback to make sure that all of us that have a role in this are supported and coordinated.”
Miller will report directly to the governor, Spaulding said, meaning, “Agency secretaries and commissioners and so forth will be listening to Lawrence with the authority of the governor.”

The founder of Otter Creek Brewing and a former CEO of Danforth Pewter, Miller is seen in Montpelier as one of Shumlin’s most trusted and competent confidantes. In January, the governor tasked him with fixing the technological, organizational and political problems facing Vermont Health Connect, the troubled health insurance exchange.

In his new role, Miller’s portfolio will include not just the exchange, but the administration’s ambitious health care payment reforms and the design of a universal health care system.

In the legislature — particularly in the Senate — many have grown uneasy about the prospect of raising perhaps $2 billion in revenue to finance Shumlin’s proposed single-payer system. Unlike Shumlin’s current crop of health care advisers, who were tainted by the flawed rollout of Vermont Health Connect, Miller commands legislators’ respect. He’ll join Floyd Nease — a former House majority leader who Shumlin assigned in February to lobby the legislature on health care issues — in making the political case.

Moulton Powden, meanwhile, is “somebody that has got instant credibility in the business community,” Spaulding said.

A commissioner of labor in former governor Jim Douglas’ administration, Moulton Powden worked briefly for the Vermont Chamber of Commerce before joining the Shumlin administration as deputy secretary of commerce. She left the agency in January 2013 to run the Brattleboro Development Credit Corporation.

In her remarks at Thursday’s press conference, Moulton Powden made clear that she, too, plans to play a role in health care reform.

“We need to get this health care rollout right,” she said. “We gotta fix it and we gotta fix it now. But we have to do it in a way that’s reasonable and affordable for the business community and for Vermonters.”

According to Miller, many are concerned about “runaway cost increases” in the health care system, but they’re also worried about the “unknowns” of reform and the transition to a new regime.

“The real concern areas are less around where we might be when we get there than around how are you going to make sure you manage the risks in the transition,” he said.

As for when Vermonters can expect Shumlin’s single-payer system to take effect, Miller said the administration is “continuing to look at 2017 as the goal date.”