Smith: Expedited Minimum Wage Hike is "Not a Declaration of Independence from the Governor" | Off Message

Smith: Expedited Minimum Wage Hike is "Not a Declaration of Independence from the Governor" 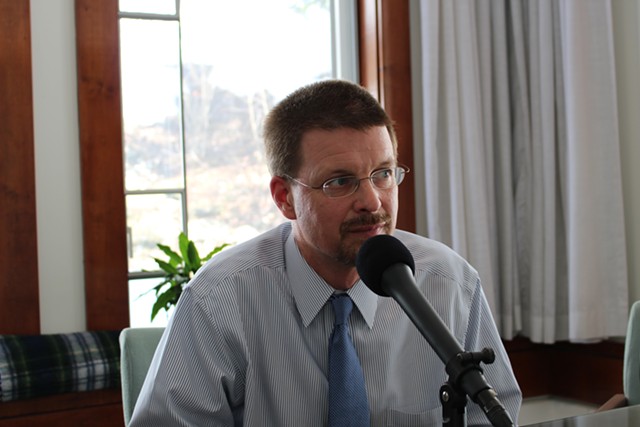 So is the Vermont House screwing with Gov. Peter Shumlin?

A little over a month ago, as you may recall, the governor suddenly found religion on the topic of raising Vermont's minimum wage. Though he and legislative leaders had barely breathed a word on the subject in the preceding months, Shumlin found himself standing beside President Obama at a Connecticut rally in March, calling on Vermont and its neighboring states to raise the minimum wage to $10.10 an hour by 2017.

"It's the right thing to do," Shumin said the next week at a press conference in Montpelier.

The Vermont House, apparently, agreed. And now it wants to raise Shumlin's bet.

On Tuesday, the House Committee on General, Housing and Military Affairs voted 6-2 to raise Vermont's minimum wage — which currently stands at $8.73 an hour — to $10.10. But instead of gradually increasing it over the course of three years, as Shumlin had proposed, the committee said the new base wage should take effect in January 2015.

The difference is significant.

Because Vermont's minimum wage is already tied to the Consumer Price Index, it's expected to rise of its own accord to $9.35 by 2017 — making Shumlin's proposed increase worth just seventy-five cents. If it's bumped up to $10.10 next year, the immediate difference would be $1.20 over the expected 2015 level — and it would continue to increase in 2016, 2017 and beyond.

On Thursday, the House Committee on Appropriations put its stamp of approval on the expedited increase, voting 7-4 in favor of the proposal. Next Tuesday, the bill is expected to reach the House floor, where House Speaker Shap Smith (D-Morristown) thinks it'll be received positively.

"I do believe that the House believes that giving people more money in their pockets — people who are at the lower end of the income scale — is a good idea," he said Wednesday.

And what does the governor think of the new proposal? 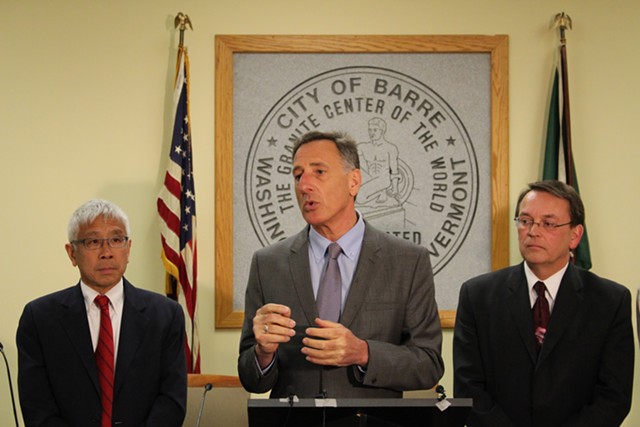 "Well, you know what my proposal is," Shumlin said Thursday at a press conference in Barre, adding that he was "encouraged" that the legislature was taking action, of any sort. "I'm not going to comment too much on the various versions. I'm convinced that we will leave this session with a minimum wage bill that pays Vermonters a fair wage for a 40-hour, hard-workin' week — and that matters to me."

So he prefers waiting three years to do the thing he said was "the right thing to do"?

"I stand by the proposal that we put forth, which is $10.10 by 2017," he said, arguing that it was important to move in tandem with Vermont's neighboring states. "But I think the real point is that while we all recognize that we must and we should raise the minimum wage, we also need to do it in a way that doesn't displace jobs. And I think we found the right formula."

Translation: My moderate and business-friendly allies might be able to live with a gradual minimum wage increase, but they'll totally freak their shit if we do this.

Translation: Good god, I hope the Senate puts the brakes on this thing and we land where I started!

Back in the House, liberals continue to feel burned by the Democratic caucus' decision — presumably supported by Shumlin — to kill a bill that would have provided workers up to seven days of paid sick leave. Could the more aggressive minimum wage proposal represent a substitute, of sorts, for lefties?

"I actually don't think so," Smith said, when asked if the two were related. "I think that those issues are actually not linked."

Perhaps, then, does the move represent House Democrats' annual effort to appear as if they are not handmaidens to the governor — and to assert their independence? After all, Shumlin will have a hard time coming out forcefully against a quicker increase now that he's rebranded himself as Mr. Minimum Wage.

That would be a little awkward.