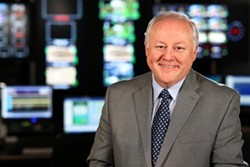 After 27 years at Vermont Public Television, president and CEO John King is leaving the station.

VPT's board of directors announced Wednesday afternoon that King and the station "have parted ways." The announcement did not indicate whether the decision was mutual.

"VPT is very grateful for John King's many years of service to VPT and the public television industry," board chairwoman Pam Mackenzie said in a written statement. "We wish him nothing but the best in his future endeavors."

King did not immediately return a call seeking comment. Board member Tom Pelletier said Wednesday that the board met Monday behind closed doors. He would not say whether it took any votes at the time and declined to comment "on any employment matters."

Reached after Wednesday’s announcement, Mackenzie said that members of the board “had a meeting with John this afternoon.” Later, other board members briefed VPT’s staff on King’s departure, she said.

“What we wanted to be able to do is to have a conversation with employees before we sent anything out to the media,” Mackenzie said.

Asked several times whether King had left the station voluntarily or was terminated, Mackenzie declined to say. She also would not reveal whether the board held any votes at Monday’s meeting.

“We have parted ways,” she said. “It’s a personnel issue. That’s the information that you’re going to get.”

The board also announced Wednesday that former KeyBank regional president and longtime state official Charlie Smith has been appointed interim president and CEO as the board seeks a permanent replacement.

King's termination follows a long-running internal struggle between the board and its CEO.

As Seven Days reported in February, a former VPT employee approached the board in February 2012 with allegations that King had repeatedly directed sexually explicit remarks at her and engaged in other inappropriate behavior. While several sources corroborated her account to Seven Days, King vigorously denied the complaint at the time, saying it was "fully investigated over the course of several weeks and found to be unsubstantiated."

In the four months after the former employee disclosed her allegations to Mackenzie, the board's executive committee met behind closed doors at least 13 times to discuss the matter. In March 2012, the board hired an independent human resources firm to investigate the situation, but the firm's report was never released.

The behind-the-scenes drama burst into public view in January after VPT disclosed that the Corporation for Public Broadcasting had received an anonymous complaint alleging that the board had violated federal open meeting law. According to the complaint, the board met more than 20 times behind closed doors over the course of two years. The CPB, which provides nearly 16 percent of the station's $7.7 million operating budget, immediately suspended its funding and launched an investigation.

VPT's board conducted its own investigation, which found in February that the board's closed-door meetings were held for legally permissible reasons, but should have been disclosed after the fact. The CPB's investigation is ongoing, though the organization has restored funding to VPT.

After the CPB complaint was disclosed, King’s allies — including a group of VPT employees — rallied behind him and called on Mackenzie and board vice chairman Rob Hofmann to resign. Board member David Taplin made the same request at a February meeting, but his fellow board members declined to take action. Instead, eight of them spoke out in support of Mackenzie and Hofmann.

Disclosure: Paul Heintz is an occasional paid guest on VPT's "Vermont This Week."