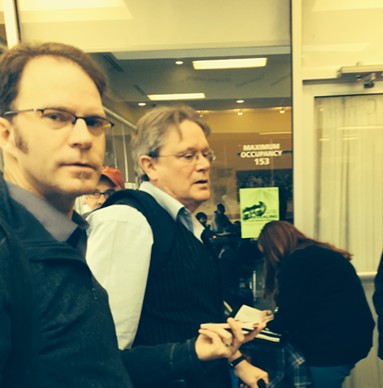 The CCTA Board of Commissioners is turning up the heat on striking bus drivers.

After emerging from their second closed door session of the day this evening, commissioners instructed CCTA administrators to plan to hire  temporary replacement bus drivers or pursue legal action to end the strike if a deal is not soon reached on their disputed contract.

"The crediblity of our service is on the line and as board members we've got to get this service going again," said commissioner Brian Palaia.

"Lets say the offer is on the table, but we've got to start planning to get the buses rolling," added commissioner Steve Magowan.

The board would have to approve either step, either of which would likely provoke the ire of striking drivers. The resolution passed by
the commissioners instructs management to report back on a plan for alternative measures by Thursday, when the board plans to reconvene.

"In the interests of restoring transit service as quickly as possible the board request that staff prepare an action plan that includes options for legal actions to end the strike and authorizes staff to secure temporary drivers for the board's approval," a draft of the
resolution reads.

The drivers union could not immediately be reached for comment.

As Seven Days reported earlier this month, state law allows an
organization like the Chittenden County Transportation Authority to ask a judge to force striking workers back
to work if the judge deems the strike to have endangered the "health, safety or welfare of the public."

Taking such a request to a judge would be unprecedented in recent
state history, experts say. Nonetheless, board chairman Tom Buckley said, "I've had a number of people suggest to me that the legal action might be a quicker way to end the strike."

The resolution was adopted by a 12-1 vote. Commissioner Bethany
Whitaker of Burlington cast the sole opposing vote.

Commissioners, who are appointed by CCTA member towns, said their "strong preference" is to see a negotiated settlement. Both the board and the drivers' union said earlier that they had prepared new offers, though negotiating sessions are not currently scheduled.

"It appears there is very good promise for reengaging in negotiations," CCTA General Manager Bill Watterson told commissioners, most of whom participated via conference call.

The commission also decided that one of its members will be in the
room during all future negotiation sessions between drivers and CCTA
management.

Chittenden County Transportation Authority drivers flooded a public CCTA board meeting this morning and hammered at a management that they say has "stonewalled" negotiations and needs to be replaced. The third week of the drivers' strike began with a flurry of activity:

* The drivers met Monday afternoon to mull over CCTA's most recent contract offer — which their leaders have said is not acceptable — and decide whether to bring it to a vote of their members or craft a counteroffer.  A union steward said he believes drivers are willing to offer a significant compromise on one remaining sticking point — the number of part-time drivers the bus agency is allowed to hire. Meanwhile, several drivers said at the earlier CCTA board meeting that their  health insurance coverage is set to expire Tuesday.

* The Board of Commissioners said little during their morning meeting as they listened to drivers and riders lay blame for the impasse at the feet of CCTA leaders. Commissioners then retreated behind closed doors for an "executive session" — to the dismay of many in the crowd.

* Also this morning, drivers revealed that their leaders met with Burlington Mayor Miro Weinberger and City Councilor Karen Paul on Sunday. They have also made contact with the office of U.S. Sen. Bernie Sanders and Lt. Gov. Phil Scott, union steward Nat Bergeron said, as part of an effort to gain political clout and make sure their concerns about "predatory management" at CCTA are heard even if a deal is reached.

"We understand that at some point we're going to reach an agreement,"  Bergeron said during the meeting. "Our concern is after that. We will be watching and reporting back. We're (communicating with) political figures. We will be diligent in our reporting, and this will be continuing on our part."

"I sense that the parties have worked hard to find a way to end the strike since last Wednesday's Burlington City Council resolution that called on both sides to act. I urge both sides to continue those focused efforts to resolve the dispute now," Weinberger said in a statement. "The drivers should be confident as they go forward that the city of Burlington has heard their concerns about the relationship between CCTA managers and drivers, and that the City will be monitoring closely to see that CCTA follows through with committed efforts to improve this relationship. I have great concern for the schoolchildren, families, patients and others who are being hurt by this ongoing dispute through no fault of their own, and call on both parties to find a way to stop this mounting damage."

In an interview, Bergeron said drivers have repeatedly compromised on key points, only to have CCTA managers make new demands and fail to meet them in the middle. He said the key issue is the length of drivers "spread time," the span from the beginning of their morning run and the end of their evening run. (Like other bus agencies, CCTA asks drivers to work a split shift, covering the busy morning and afternoon commutes and taking time off in between.)

CCTA management is holding out for maximum spread of 13.5 hours, while drivers are drawing a line at 12.5 hours, where it has been for years. Bergeron said that drivers are willing to yield on another key demand — banning CCTA from hiring part-time drivers — if the agency will yield on spread time.

"At this point, we'll let them have as many part-timers as they want," Bergeron said. 'Every time we get close to an agreement, they change their position."

Board members may consider steps to end the impasse including pursuing an action with the courts or the Vermont Labor Board, or hiring temporary replacement drivers. But this morning's session — the public part, at least — was devoted to hearing roughly 20 drivers and supporters criticize management and describe the experience of being in the middle of a strike now entering its third week.

"You don't stand for something, you fall for anything," driver Thomas Bridges said. "I've watched my savings depleted, but I'm standing my ground. (CCTA leaders) don't want an agreement. Its about punishment."

Many called on the board to fire CCTA's leaders or make them come to a deal.

"You are part of this if you do nothing," driver Arthur Campbell told the commissioners. "Who are you people to hold that power?"

CCTA General Manager Bill Watterson, sitting alongside the board members, said nothing throughout the meeting as drivers pelted him with criticism. Invoking the law allowing public bodies to go behind closed doors to discuss contract negotiations, the board then left, as members of the crowd shouted "shame on you," and "we need an answer."

They emerged about 45 minutes later, and said they plan to reconvene later in the day.