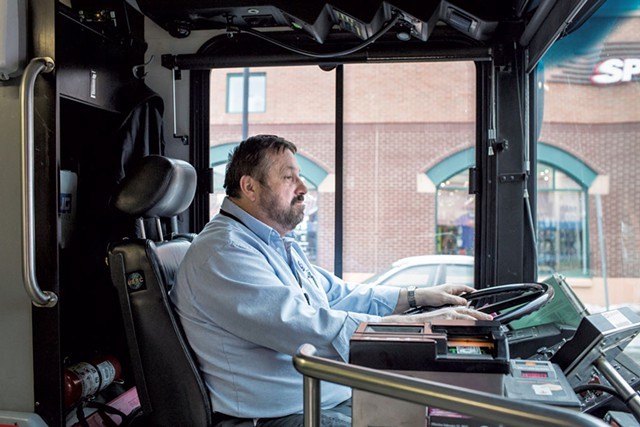 Well, so much for hoping that Chittenden County Transportation Authority drivers would soon get back behind the wheel.

While drivers on the picket lines on Friday said they had been told to plan to vote on a new contract today and were preparing to return to work by Monday, a marathon 17-hour bargaining session failed to yield an agreement between management and union representatives.

By Saturday morning, it had became clear that there would be no deal, no vote and no end in sight for the 71 union drivers — or for the students, workers and and other daily riders who have been forced to seek alternate transportation or found themselves stranded since drivers began striking earlier this month. Normally, the bus agency provides 9,700 rides a day.

"The mediator called it off because there was no forward movement," driver spokesman Rob Slingerland said in a statement posted on the drivers' website. "Negotiating team held strong as the company literally attacked everything! Not quite sure what the company is looking for but it sure looks like they aren't caring too much about their ridership! They give, they take back, they give, they take back. Why are we even talking to them? So sad ...... Going into 3rd week of walking the line and twice we met and they wanted it their way ..... as usual. Solidarity ......."


Bus drivers and their supporters held another rally downtown today. At CCTA headquarters, officials say they had offered "significant compromises" and were able to reach a tentative agreement on one of the four remaining sticking points — how the agency handles complaints and uses security cameras on buses.

But they could not come to agreement with union leaders on issues including the length of drivers' split shifts and their compensation. According to the Vermont Workers Center, drivers offered a compromise on allowing more part-time workers, which they have been against, but management "refused to budge" on other priorities.

No new negotiating sessions are scheduled. CCTA said it had offered union negotiators a complete contract proposal that it should put to a vote of membership. (Drivers unanimously rejected the last contract they voted on.) Alternately, CCTA said drivers owe them a counter offer.

"The union could choose to bring this complete contract proposal to the drivers to a vote, although it did not commit to doing so," said the nonprofit bus agency, which get much of its revenue from state and local tax dollars. "CCTA hopes the union will elect to bring the most recent complete proposal to a vote in the interest of restoring service for our passengers as quickly as possible."

Meanwhile, both sides are taking their case directly to the public. Drivers and their supporters set up a website rallying people to the picket lines, providing details on contract sticking points and encouraging financial donations. CCTA invited members of the public to a special meeting of its governing board Monday at 7:30 a.m. at the O'Brien Community Center in Winooski. The meeting notice said member of the public are welcome to "offer comments about CCTA's services."