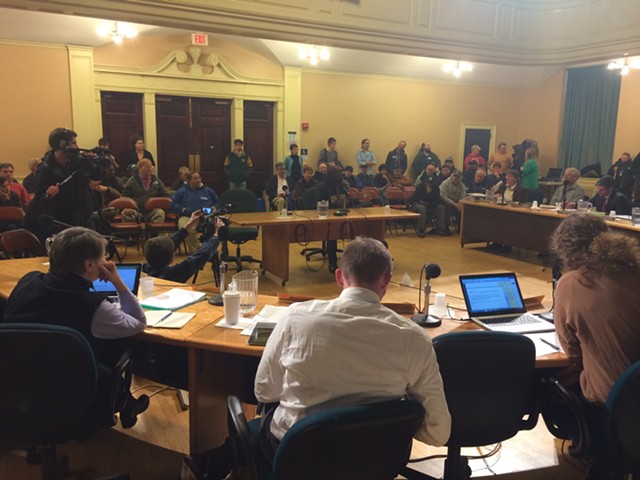 In a victory for striking Chittenden County Transportation Authority bus drivers, the Burlington City Council on Wednesday rejected a motion that would have urged the parties to settle their grievances with management in legally binding arbitration, a step drivers have refused to take.

After an emotionally charged 5-hour meeting that saw dozens of speakers and numerous amendments, councilors passed a hollowed-out resolution. Rather than calling on CCTA and the drivers parties to use binding arbitration or "other alternative means" of reaching a deal, councilors simply urged them to work toward resolving the standoff.

Many at the council table acknowledged the resolution would have little practical impact, including Mayor Miro Weinberger, who had earlier urged the transit agency and drivers to engage in binding arbitration as a way to get buses rolling again.

"There's nothing to disagree with," the mayor said of the resolution. "I'm concerned we're not signaling enough urgency, understanding the pain in the community. I thought that was the intent of having this tonight."

Drivers have rejected CCTA's multiple pleas to go to arbitration, a process used by Burlington City Hall employees when they cannot reach agreement. Drivers worry that arbitration would be skewed in favor of CCTA management.

Councilor MaxTracy, P-Ward 2, argued against a resolution urging binding arbitration, saying it "would only have the affect of inflaming the drivers by leaving them feeling that they have a government that doesn't listen to them."

The resolution the council passed also called on Burlington's representatives to the CCTA board to periodically report back to the council.

The only councilor to vote in opposition to the watered-down resolution was Dave Hartnett (D-Ward 4), who said the council  should more forcefully try to urge an end to a standoff that is hurting lower-income residents who rely on the transit system. Normally, CCTA provides nearly 10,000 rides a day to people including public school students, workers and people going to medical and social service appointments.

"We failed in representing the people," he said. "We didn't address their concerns. That's who we should be representing. Not management, not drivers, but the people who use this service ... that we don't appreciate, because we don't walk in their shoes."

The mayor, who had previously urged the parties to go to arbitration but said little else about the strike, floated the idea of requiring periodic reports back to the council on the state of CCTA management/labor relations.

"That would further signal that the council is concerned about the situation and is not ignoring the credible statements made tonight," Weinberger said. "But (still) allowing the council to act and say there is urgency to the situation, it must end and people are suffering from the status quo. We expect action and we are not seeing it right now. We are not seeing sustained negotiations. We are not seeing clarity ... It's a difficult place for the community to be, and it cannot continue."

"This is intended to provide motivation to parties who are sitting down once a week, if we are lucky," Mason said.

CCTA has been shuttered since last week after drivers rejected CCTA's most recent contract proposal forcing scores of commuters and low-income residents to scramble for alternate transportation. With the strike in its tenth day, drivers, University of Vermont students and union advocates crammed the council's chambers and railed against CCTA management.

Driver Tom Griffith said while, though he had a long record of customer satisfaction and safe driving, he nearly lost his job for two minor accidents that left minimal damage and resulted in no police citation. CCTA managers, he said, are too intent on punishing drivers.

"No driver should lose his job for something so minor as a broken mirror," Griffith said.

Earlier in the evening, the council selected a financier for a $6 million bridge loan to pay off the city's settlement with Citibank in the Burlington Telecom dispute.

Councilors unanimously voted to accept a loan from Burlington businessman Trey Pecor and Merchants Bank over an offer from Rosemawr Management LLC, a first based in New York City that specializes in municipal financing. With the loan, the city will be able to pay the $10.5 million settlement with Citibank over Burlington Telecom's financial woes. Citibank financed the infrastructure for the city-owned utility, and sued two years ago demanding that the city pay $33.5 million for the cost of the network.

The Pecor/Merchants Bank loan offered a lower interest rate — seven percent  — and would allow the city to recoup more money from an eventual sale of Burlington Telecom than Rosemawr's proposal.

Here is how it will work:

Merchants Bank will loan Pecor $6 million at an interest rate of seven percent. The loan will be secured by Pecor, and BT's property. Pecor will transfer the $6 million to the city, and will receive no compensation during an expected three to five year financing period. Pecor's family has long been prominent in the Burlington business company, and owns Lake Champlain Transportation Co. and the Vermont Lake Monsters, among other interests.

When a longterm buyer for Burlington Telecom is found, Pecor and the city will split the proceeds: Under the terms of the agreement, if BT is sold within 36 months of the agreement, the split will be 50/50. The city's share would gradually decline if a sale takes longer.
The city would have given more proceeds of a sale to Rosemawr.

“I’m thrilled to be partnering with the city of Burlington, to be partnering with a mayor and an administration that are making such great progress and moving our city in the right direction,”  Pecor said in a statement released through city hall. “I love this city; my family loves this city; our future is here in Burlington. I am very fortunate to play a role in helping Burlington make the most of that future.”

The Vermont Public Service Board must approve the transaction, which Weinberger said would likely take until the summer. The city will file with the PSB by the end of the week, the mayor said.