CCTA, Drivers Swap Barbs; No End in Sight for Strike | Off Message

CCTA, Drivers Swap Barbs; No End in Sight for Strike 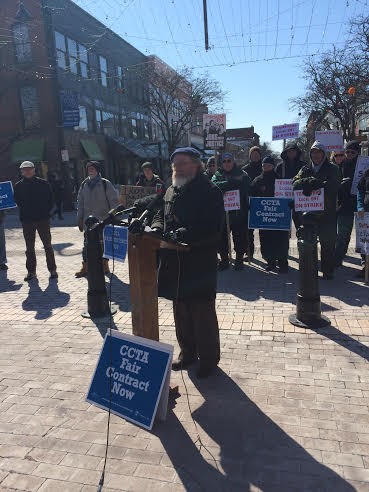 With a bus strike entering its second week, relations between Chittenden County Transportation Authority management and drivers appear to be getting worse, not better.

The sides failed to reach an agreement on a new contract over the weekend and started issuing statements that show they don't even agree on what went wrong on Saturday.

CCTA said that it offered a new compromise on Saturday but that union representatives "walked out of negotiations without notice while the CCTA team was still actively engaged with the federal mediators at 8:20 p.m." The bus agency's statement continued, "CCTA’s proposal included compromises in areas identified by the union as priorities. However, union demands continue to be out of line with CCTA’s obligation to operate a safe, affordable and reliable public transportation system."

At a press conference Monday at Church and Cherry Streets, where drivers and supporters have been picketing for a week, drivers accused their bosses of "stonewalling." The drivers left the bargaining table only after CCTA  made it clear it would not meet the union's demands, said drivers' spokesman Rob Slingerland.

"CCTA had already told them they couldn't meet their demands," Rob Slingerland said. "We didn't walk out."


Moreover, Slingerland said that CCTA management officials showed up three hours late to the Saturday negotiating session, then took a lengthy break to consider the drivers' position — which the union had given them 48 hours earlier.

"There may have been two hours of honest bargaining," Slingerland said. "They're stonewalling with loopholes and nitpicking. It's a (strategy) of wearing us down, and we aren't wearing down. They're telling half truths to the public in order to sway the public."


No negotiating sessions are currently scheduled, and the strike is now in its eighth day with no end in sight. CCTA normally provides nearly 10,000 rides a day in Central Vermont, and the strike has forced droves of low-income residents, Burlington school students, and HowardCenter patients to walk, find alternate transportation, or be stranded.

Experts say a Vermont judge or the Vermont Labor Relations Board could be brought in to end the stalemate, but both processes are complicated.

"CCTA is disappointed an agreement was not reached and is deeply concerned about the impact on its passengers," the agency said.

"If they were so concerned, we would have a fair contract," Slingerland said.

Joining the drivers today were Burlington Rabbi Joshua Chasan and representatives from other union groups, including the Vermont State Labor Council AFL-CIO.

"This strike appears to be about respect for a group of men and women who are highly respected by the people who ride their buses," Chasan said, later adding, "Management needs to look into its own heart so that it can recognize that its lack of trust for its workers is a major source of disrespect."

Slingerland and union steward Mike Walker said drivers have no plans to offer any more proposals, and reiterated that they will not settle their differences in binding arbitration, as CCTA and Burlington Mayor Miro Weinberger have urged.

"If they don't like it, they can drive the bus themselves," Union Steward Mike Walker said at one point, later referring to CCTA management as "flying monkeys," in an apparent reference to the The Wizard of Oz movie. "If they're going to continue to stonewall, enough is enough, we're drawing a line in the sand."

But, according to CCTA, the union made fresh demands on Saturday on items they had previously compromised on: Drivers asked for wage increases, despite public declarations that their strike was not about pay, and demanded a 12.5 hour limit on the "spread time," the time from the beginning of a morning shift and the end of an evening run. (Drivers often work split shifts with time off in the middle of the day.) The drivers had previously agreed to increase the spread time to 13.5 hours.

Slingerland and Walker said the drivers did not seek raises, and made the 12.5-hour demand only because their offer to go to 13.5 hours was contingent on CCTA offering similar compromises in their negotiating priorities.

CCTA said drivers are also insisting that the agency not be able to investigate anonymous complaints of driver misconduct. Slingerland said that is because drivers simply "don't trust" their bosses and believe the agency is too eager to punish them for minor infractions.

As the press conference began, a passing motorist slowed, stuck his head out the window and yelled to the drivers, "Get back to work, you hostage takers."