Local Towns Not Planning to Seek CCTA Refund, for Now | Off Message

Local Towns Not Planning to Seek CCTA Refund, for Now 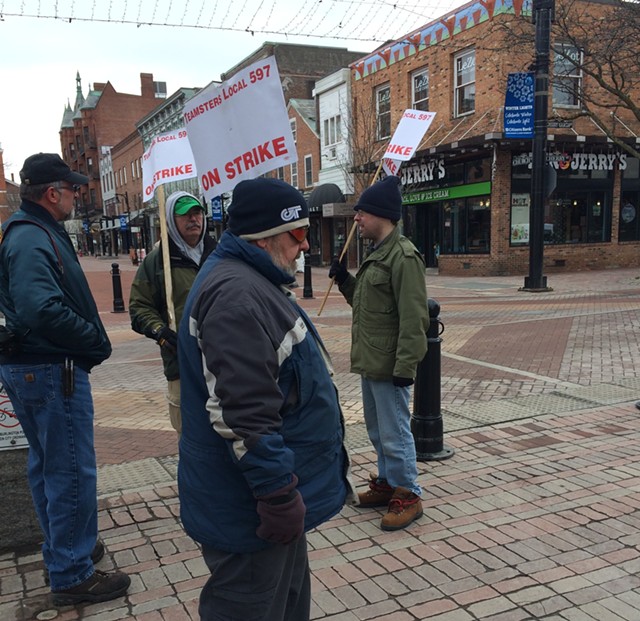 The state Agency of Transportation is threatening to leverage its contract with CCTA to encourage an end to the bus strike, but Chittenden County communities who rely on CCTA aren't willing to take similar action.

Leaders from several Chittenden County communities said that, while they're frustrated with a strike now in its fifth day, they're not focused on seeking repayment for missed service this week. For now, they're content to remain on the sidelines and hope that a resolution to the contract dispute will soon come.

Individually, towns don't have a lot of leverage or financial clout, and they need a vibrant public transit system in order to reach their goal of clustered, walkable communities. Perhaps more significantly, unlike VTrans, local communities don't have individual contracts with CCTA. Instead, they are considered members of CCTA, paying their bills based on a complex formula.

“It’s a membership organization. The communities decided to get together and support the transit system," said Shelburne Town Manager Paul Bohne, whose community pays CCTA $93,000 a year. "People will be more concerned about the health of the transit system than if they are missing a few thousand dollars. I wouldn’t want to start jeopardizing it by suggesting that we want [one or two weeks'] refund.”

Once they decide to join CCTA, towns are considered members, as CCTA's charter with the legislature spells out — some core communities have belonged for decades. The relationship is similar to that between towns and counties, in that members have little say in the organization's costs and are obligated to pay. (Most member towns have one representative on CCTA's board of directors, who in turn answer to local select boards and town managers. Burlington has two members. The CCTA board chairman has voiced strong support for CCTA management during the labor feud.)

“We don’t have too much of a choice," said Essex Town Manager Pat Scheidel, whose community pays $240,000 annually. "They say what we should pay, and that is what you pay. We are joined at the financial hip with CCTA ... In all honesty, I haven’t read the CCTA agreement in a while."

Others voiced more frustration. Winooski City Manager Katherine Decarreau said the city council would discuss at its next meeting the possibility of seeking repayment from CCTA for missed service. The town pays $150,000 annually.

“A lot of our citizens are struggling. Many don’t have alternate transportation and are having to walk in very cold weather. It’s a tough event," Decarreau said. "We’re trying to give them time to figure it out, but our patience is not unending. Our citizens are really struggling.”

CCTA spokeswoman Meredith Birkett did not respond to a request for comment.

It does not appear that any community is  considering leaving CCTA, however, and most town managers say they wouldn't consider seeking financial payback unless the strike lasts significantly longer.

“I haven’t thought of that," said Williston Town Manager Richard McGuire, whose community pays $168,000 annually. "I guess that’s something we would have to look at."

Many local communities have poured their energies in recent years into sustainable planning initiatives, hoping to cluster development and encourage residents to get out of their cars. Without CCTA, those dreams would be impossible, managers said.

“It’s been a part of our plans for having a new town core that is walkable, that has housing and density, and we have viewed a transportation system as something that would help make that happen,” said Milton Town Manager Brian Palaia. Milton pays CCTA $50,000 annually.

The largest local payment to CCTA comes from Burlington — more than $1 million this year, according to city records.

Mike Kanarick, chief of staff for Burlington Mayor Miro Weinberger, did not respond to requests for comment for this story. Weinberger is currently traveling in Japan.

Officials from St. Albans and South Burlington also did not respond to requests for comment.

Meanwhile, bus drivers yesterday morning continued to picket at Cherry and Church streets. The half dozen strikers quietly walked in a circle and declined to comment, saying that the union had declared a "media blackout."

Town managers were similarly reluctant to weigh in on the negotiations.