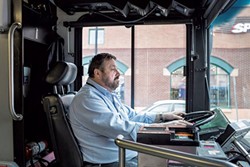 The Chittenden County Transportation Authority says it will shut down all but two routes on Monday if drivers' carry through with a threatened strike,  potentially disrupting the lives of thousands of county residents.

With a last-ditch bargaining session for a new contract scheduled on Saturday, CCTA confirmed this morning what it had previously refused to acknowledge — that it effectively has no backup plan to keep its routes running in the event of a strike.

Limited service would continue on the Montpelier LINK line and the 116 bus from Middlebury to Burlington if members of the Teamsters Local 597 walk off the job, CCTA said in a statement this morning. CCTA operates the Montpelier LINK Express jointly with Green Mountain Transit Agency, whose non-union drivers are still working. Similarly, the Middlebury route is run in cooperation with the non-striking Addison Country Transit Resources.

Here is the revised schedule.

But the rest of the nearly 10,000 people who board a CCTA bus every day would be effectively stranded if the union carries through with its threat to strike on Monday. CCTA pointed the finger squarely at the union, which has taken the agency to task for what it says are unfair work schedules and hostile management tactics.

Citing "the potential for the union to halt service," CCTA said it still believes a deal can be struck on Saturday.

"A labor action that disrupts the delivery of this vital public service is not a productive way to resolve the remaining differences," the statement said.


CCTA , which provides 2.7 million rides annually throughout central Vermont, says it has a communication plan in place to inform riders in the event of a strike, though it provided no details.