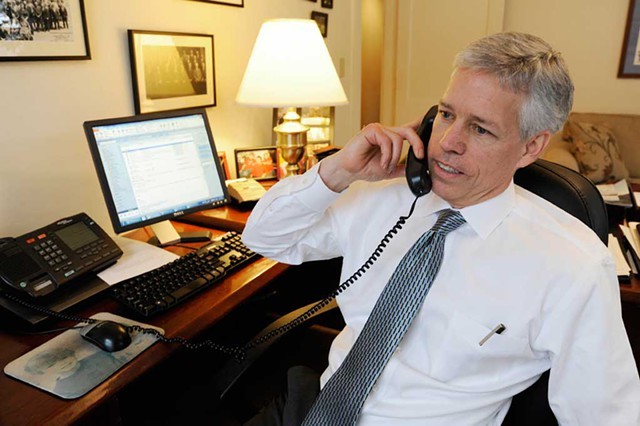 The race for the part-time, $3,000-a-year position became unusually heated in the capital city, thanks to a long-running dispute between the incumbent and the challenger. Hallsmith was ousted from City Hall last November and claimed that Hollar pressured City Manager Bill Fraser to fire her in order to squelch her advocacy for public banking. Hollar works as a Statehouse lobbyist for Downs Rachlin Martin and represents Bank of America and Wells Fargo, among other clients.

Hollar maintained he played no role in Hallsmith’s firing. According to Fraser, the former planning director was dismissed for refusing to cooperate with her superiors and improperly mingling her professional and advocacy roles.
Hollar did not immediately respond to a phone message seeking comment last night.

In an interview Tuesday night, Hallsmith said she will likely run again for public office, though probably not for mayor.

"The reception I got from people standing outside today was really thrilling, it made it worth it," Hallsmith said last night. "I'm glad I did it because it's important for people to have a choice. It's all good. It's how democracy is supposed to work."