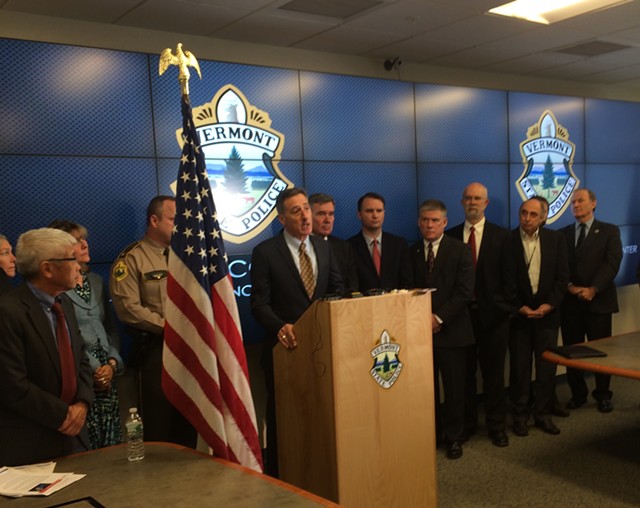 Flanked by national drug czar Gil Kerlikowske and a phalanx of state officials, the governor unveiled his latest initiative in combating opiate addiction, which has become a centerpiece of his agenda.

The state has already dispensed 400 doses to the HowardCenter, another 100 to the Good Neighbor Health Clinic in White River Junction. Officials said they plan to begin sending doses to other "hub" facilities in the state's drug treatment system, starting with Rutland.

"It's about finding ways to partner to help anyone who is helpless," Shumlin said. "Vermont wants to lead the way in treating this is a disease."

Vermont State Police Col. Tom L'Esperance said 10 officers, including himself, carry the drug, but the agency plans to outfit all troopers in six weeks. (The troopers need a brief training in how to use the drug.)

"This was by far the easiest decision I've had to make as head of the Vermont State Police," L'Esperance said.

Augmenting police efforts, Health Commissioner Harry Chen said that, as of April 1, the state will allow all EMTs to carry the drug, effectively meaning every ambulance in the state will have it on board. At present, only higher-level paramedics are allowed to carry naloxone, which is administered nasally. (At least one certified EMT is required to be on a responding ambulance, officials said.)

"One minute a patient may be unresponsive, not breathing and blue in the face, and within 30 seconds, all of a sudden they are awake," Chen said.

Kerlikowske said he believed Vermont's efforts to combat opiate addiction could become a model for other states to follow. "Some places have not ripped the (lid) off and looked at this and the horrible problems it causes," he said. "It takes a lot of courage to call this an epidemic."

Officials did not specify how much the initiative will cost, though each dosage of naloxone costs roughly $20. Officials said the state departments of health and public safety would likely foot the bill.

National Public Radio reported last week that the cost of Narcan nearly doubled in recent years as drug companies saw an increased demand for the drug. Massachusetts, which has conducted a 7-year pilot project allowing emergency responders to administer the drug, has seen 2,500 overdoses reversed because of the drug, NPR said. The state now pays $42 for a dose; When the program launched, it paid $22.

After the press conference, Shumlin, Kerlikowske, U.S. Rep Peter Welch and others toured the Chittenden Clinic, a drug treatment facility in South Burlington that opened last year.
Prev
Next