The Weekly 7: This Week in Vermont News | Off Message

The Weekly 7: This Week in Vermont News 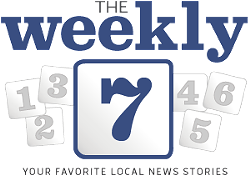 Each weekday, Seven Days scans the news across the Vermont media landscape to find the smartest, best and most compelling stories. We bundle them up in an email and send them out to our subscribers early each afternoon. It's called the Daily 7.

So which Vermont news stories are you reading? And which should you be reading? Here are the stories you clicked on most from this week's editions of the Daily 7:

A YMCA member in Burlington left an epic note to the person who stole his wallet from the locker room — and a few days later, he got the wallet back.

Police say a Poultney toddler died from blunt force trauma to her head. Her stepfather was charged with second-degree murder.

A Poultney man pleaded not guilty to killing his 2-year-old stepdaughter Monday; the mother of the girl had to removed from the courtroom. Earlier in the day, protesters questioned DCF's call to grant custody to the mother.

IBM has temporarily postponed layoffs that were initially planned for Wednesday, according to reports. How many would lose their jobs in Essex Junction is unclear. (For an update, see next item.)

Gov. Peter Shumlin confirmed today that IBM is again laying off workers at its Essex Junction plant. More than 100 employees are expected to lose their jobs.

A tour bus crashed into a jackknifed tractor trailer on Route 22A in West Haven on Friday, February 21. The driver of the bus was killed.

The City of Burlington is making data on city finances, police calls and even library circulation available on a new website that anyone can access.