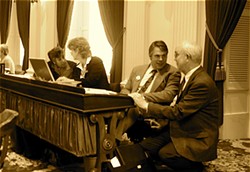 Floyd Nease knows a thing or two about tough votes.

When he was serving as House majority leader in 2009, Nease helped whip just enough Democratic votes to override then-governor Jim Douglas' vetoes of the legislature's budget and Vermont's historic bill to legalize gay marriage. Both were total nail-biters.

Now Nease is being deployed by Gov. Peter Shumlin to marshal support for yet another big kahuna: a vote expected next spring to finance the governor's universal health care plan.

"This is a heavy lift for the legislature," he concedes. "And, you know, it's not going to be an easy vote for anyone. We have to acknowledge that."

As Vermont Public Radio's Peter Hirschfeld first reported Wednesday, Nease is being redeployed from the Agency of Human Services, where he currently serves as director of systems integration, to the 5th floor of the Pavilion State Office Building, where he'll lobby legislators on the governor's behalf.

"With all that is going on with health care reform, AHS felt it would be beneficial to have an additional presence in the legislature during the session," says Shumlin spokesman Scott Coriell.

Nease, who characterizes his temporary reassignment as "open-ended," plans to take some time to get up to speed on the state of health care reform. Then he'll head next door to the Statehouse to start working his former colleagues. The Johnson resident served in the House from 2002 until 2011 — two terms as majority whip and one as majority leader.

Nease readily acknowledges that many in the legislature have grown nervous about Shumlin's proposal in the wake of Vermont Health Connect's struggles, as the date of next year's financing bill approaches.

"I think people have concerns. They're legitimate concerns," he says. "They're going to need to vote one way or the other, ultimately, on whether or not to go forward, and they need to have enough information to make them comfortable enough to do that. Part of what I'll be doing is finding out what people need and getting it to them."

Nease is just the latest arrival in a growing team of Shumlin staffers tasked with preparing for a health care overhaul planned for 2017.

Last June, the governor pulled Michael Costa from the Department of Taxes to serve as deputy director of health care reform; he's in charge of coming up with potential financing options. Last September, Shumlin hired Coriell, a former communications director for Congressman Peter Welch, to serve as a "special assistant" with a focus on health care reform. In that role, Coriell acts as both a legislative liaison and spokesman on health care issues.

Nease says he doesn't view his hiring as an admission that the administration has failed to make its case with the legislature.