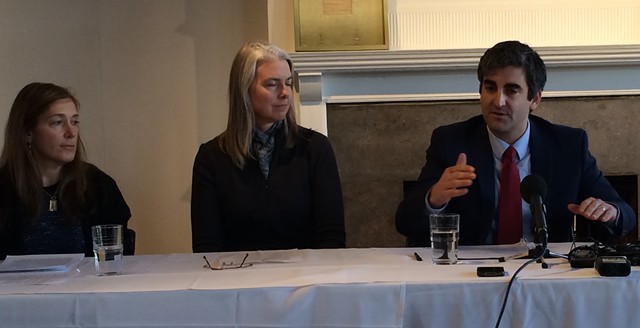 The Burlington City Council unanimously assented to the terms of a settlement agreement reached with Citibank over the financial mismanagement of Burlington Telecom.

Councilor Karen Paul, D-Ward 6, described the Monday evening event as “historic.” But, as Council Dave Hartnett, D-Ward 4 later pointed out, few members of the public stayed to witness it. All but a handful of the residents in the audience had cleared out of the Contois auditorium by the time the vote took place late in the council's meeting.

Crowd or no, Mayor Miro Weinberger said the consensus — all 14 councilors co-sponsored and voted for the resolution — sends an important message to the Vermont Public Service Board (PSB), investors and lenders, whose approval and wherewithal will be key to the settlement plan’s success.

The city is settling the $33.5 million lawsuit brought by Citibank for $10.5 million and a share of the future value of Burlington Telecom (BT). The mayor announced the agreement earlier this month.

The deal, according to Weinberger, will allow BT to continue to operate, while minimizing the impact of its debt burden on taxpayers. He also expects it to restore the city’s credit rating, which dropped precipitously when BT was on the verge of financial collapse in 2009.

The settlement is also a significant win for Weinberger, who inherited the BT fiasco from the previous mayor, Progressive Bob Kiss.

To an outsider, the scene in City Hall on Monday evening might have appeared odd — councilors giving heartfelt speeches about the financial trials of a telecommunications company. But for those involved involved in the long ordeal, the vote’s significance couldn’t be overstated.

Paul said that the people spearheading the settlement effort — councilors, the Weinberger administration, the city’s legal team, the Blue Ribbon Committee — “have worked harder than perhaps any city in America to face our challenges.”

He did observe, however, that those customers and other residents didn't turned out in droves like they had during earlier stages of the telecom saga. “I can’t think back a few years ago when this room was packed up in the rafters until one o’clock or two o’clock in the morning … Now we’ve come full circle and there are eight people in the room.”

Council president, Joan Shannon, D-Ward 5 recalled what she described as a relentless push, on the part of Comcast, to lure customers away from Burlington Telecom, when its fate was uncertain. Like Harnett, she thanked the “4,000 customers out there for whom, no matter how much free internet service Comcast offered them, it didn’t matter.”

Weinberger said that the unanimous vote “will be helpful in numerous ways with the hard work that remains.” The first job will be to get the PSB to approve the settlement. Weinberger said the council has to file a petition with the board by March 15.

The city must also find a lender willing to supply the $6 million in bridge financing, which constitutes the largest chunk of the payment owed to Citibank under the terms of the settlement.

Burlington also needs to recruit an entity that wants to take the reins of BT. Weinberger has said that he thinks it's more prudent to let an outside partner to take ownership of what’s currently a city-owned utility, and the settlement plan is structured around this arrangement.

Still up in the air is whether taxpayers will be reimbursed for at least part of $16.9 million the Kiss administration spent, without authorization, on BT. That, according to Weinberger, depends on how much money the city reaps from the anticipated sale of BT.