RGA Slams Shumlin, But Says It Doesn't Currently Plan to Target Him in 2014 | Off Message

RGA Slams Shumlin, But Says It Doesn't Currently Plan to Target Him in 2014 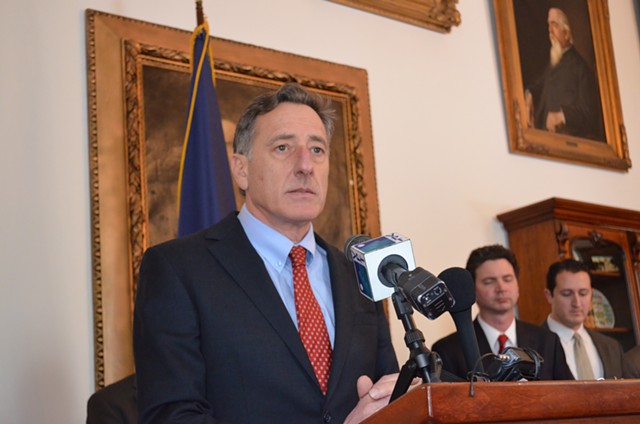 The Republican Governors Association took Gov. Peter Shumlin to task Friday for presiding over what it called a health insurance exchange "in shambles." But despite the provocative and hyperbolic rhetoric, a spokesman for the organization conceded that it's not currently planning to target Shumlin as he seeks reelection this November.

Since December 2012, Shumlin has served as chairman of the RGA's counterpart, the Democratic Governors Association.

"[DGA] chair and Vermont Governor Peter Shumlin may want to stop spending so much time helping other Democrats get elected and start paying attention to the problems in his own state," Gitcho wrote. "As we continue to see in states across the country, Vermont is the latest to face an ObamaCare state exchange disaster. Despite being home to some of Obama's biggest supporters, as Newsweek's Lynnley Browning puts it, if ObamaCare 'can't' make it there, some argue, it can't make it anywhere.'"

While there's nothing extraordinary about one partisan electoral organization slamming the leader of another, Gitcho's blast is unusual in Vermont. After the 2010 gubernatorial election — during which both the RGA and DGA spent heavily to win Vermont's open governorship — the RGA has largely left Shumlin alone. Much to the chagrin of Shumlin's most recent Republican opponent, Randy Brock, the RGA sat out the 2012 race.

So does Gitcho's missive mark a shift in the RGA's strategy?

Not so, says RGA press secretary Jon Thompson. He says this is just the latest in a series of "research pieces" the organization has cobbled together to attack Democratic governors over health care reform.

"We want to show that these Democrat governors championed ObamaCare and were like, 'This law is great and is going to work great,' and didn't offer any opposition or anything. And now the state exchanges are not working the way they were designed to and clearly not working the way we were told," he says. "It's not like a new thing going after Shumlin. If there's something he needs to be held accountable on, we're going to recognize that."

But that doesn't mean the RGA plans to invest time and money into defeating Shumlin this fall.

"There is a Vermont governor's race and there's no secret Vermont's reliably Democratic, usually, and so it's probably not going to be a place where we run ads and really make a play to beat Shumlin," Thompson says. "But with him as head of the DGA, we're going to make sure that if he's spending his time flying around the country doing fundraisers for Democratic candidates while the state exchange back home is melting down, I think that's something the voters of Vermont should definitely know about."

Ouch! Putting aside the fact that Vermont had a Republican governor as recently as four years ago — and the fact that Vermont's exchange has been relatively successful at signing up individuals — that's certainly not good news for any GOPers privately pondering a run against Shumlin (So far, none have publicly said they're inclined to challenge him.).

But Thompson says the RGA's priorities could change.

"That's not definite. I'm just saying, as of right now, it's not one of our top races. That's a better way to put it," he says. "I was just saying that, as of right now, it's not a top targeted race. But there's a very real possibility that it shifts. Especially if [health care reform] keeps spiraling out of control or we see more like this, you could see us get more involved."

Has the RGA heard from any Vermont Republicans interested in challenging Shumlin?

"We have had contact with a few people, but we haven't really commented publicly on who that is," he says. "Just because we don't want one person to think we're favoring someone over the other."

He adds, "I definitely think the governor will have an opponent. I think 'viable' is still something to be determined."

So if the RGA isn't trying to boot Shumlin out of office, why the sudden focus on the Vermonter?

One possibility could be that it's trying to change the subject away from its own embattled chairman, New Jersey Gov. Chris Christie. For the past month, the DGA has been hammering Christie over allegations that he or his staff caused a massive traffic jam on the George Washington Bridge in order to punish a political opponent.

But while the DGA has been eagerly circulating newspaper editorials and calls from Republican officials for Christie to step down as RGA chairman, Shumlin himself has stayed above the fray. The governor brushed off questions about the issue at a press conference several weeks ago and did so again on Thursday.

Asked if he thought Christie should step down from the RGA, Shumlin said, "You know, I think that's a decision that the Republican Governors Association and Chris Christie have to make. I can't make it for them."

Shumlin would not say whether he thought Christie could continue to effectively lead the RGA, saying only, "I'm more concerned about effective leaders."

The Democratic Governors Association did not respond to a request for comment Friday.