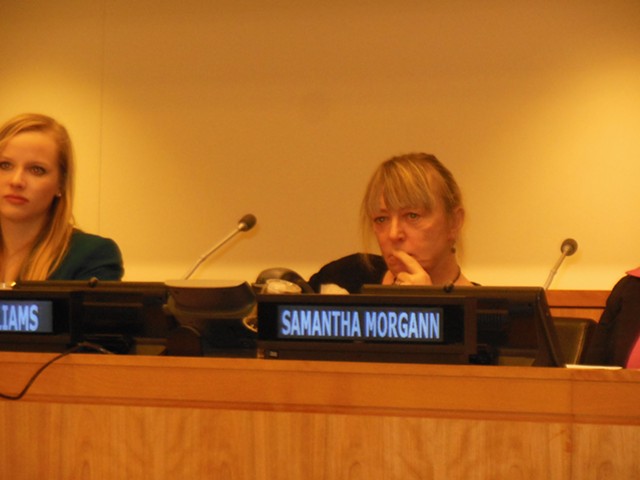 An audience of about 200 college students listened raptly at United Nations headquarters in New York on Tuesday as Jody Williams recounted her life journey from small-town Vermont to international activism and acclaim.

Williams, 63, was awarded the Nobel Peace Prize in 1997 for her leadership of a grassroots campaign that led to a global treaty banning production and use of landmines.

It was schoolyard bullying in Putney that first provoked her to confront the harmful exercise of power, Williams recalled. She said she stood up to “the stud of fourth grade who was being mean to a little, nonathletic kid.” And that boldness arose, Williams explained, from having earlier seen her parents defend her older brother, Steve, whom “kids nearby loved to torture” because he was deaf.

Putney, she told the multiracial gathering from New York-area schools, was a town where “everyone looked more or less alike.” She said she didn't see a person of color until she was 17.

Williams extended her interpersonal advocacy into the political realm after enrolling at the University of Vermont, where she began taking part in protests against the war in Vietnam.

The brutality of that conflict “shattered my belief in the beautiful mythology of the U.S.,” Williams said. “I learned a lot of the unpleasant parts of my country's history.”

After graduating from UVM, she devoted herself to opposing “U.S. militarism” around the world. Williams took part in campaigns in the 1980s against the Reagan administration's support for right-wing forces that were fighting socialist movements in Central America. As in Vietnam, the wars in Nicaragua and El Salvador were being instigated by “fat white men in Washington,” Williams remarked.

An organization of antiwar Vietnam veterans encouraged her in 1991 to lead an effort to outlaw landmines — a type of weapon that can maim and kill long after a conflict has ended. That small-scale initiative ballooned into a worldwide campaign that culminated in the 1997 landmine treaty that has now been signed by 161 countries.

Winning the Nobel prize has made Williams a global celebrity and, as one audience member remarked on Tuesday, “a role model for youth and for women all over the world.”

The formerly dutiful Catholic girl from Vermont travels now in the rarefied company of fellow Nobel laureates and leftists with household names. In one of her extended responses to students' questions, Williams made mention of “my good friends, the Dalai Lama and Archbishop [Desmond] Tutu.” The Tibetan monk and the South African anti-apartheid leader both say “men have destroyed this planet since the beginning of time,” Williams reported. “It's now time for men to step aside and let women clean up the mess,” she quoted the two visionaries as saying.

She simultaneously sought to dissuade the students from according her hero status. “I'm still a grassroots activist,” Williams said, assuring the members of her audience that they, too, have the potential to change the world.

She did come across in the UN conference room as plainspoken and unpretentious. “I swear like a stevedore,” Williams assured the students. “My mother asked me not to say the F-bomb in public because it tarnishes my Nobel image.”

When she's not circling the globe, Williams shares a home in Virginia and another in Westminster West with her husband, Stephen Goose, an arms-control advocate at Human Rights Watch.

Still an organizer, Williams has formed the Nobel Women's Initiative, through which she and other female laureates work to promote peace and gender justice. She's personally focused as well on “stopping killer robots,” which she defined as a category of mechanized weapons other than drones.

The United States has refused to sign the global landmine treaty (although it does abide by its terms) because, Williams suggested, military leaders “feared that if they gave in to civil society and banned landmines, we would come after other weapons.” She paused for a beat and then added, “Well, they were correct.”