From Lobbyist to Legislator: Sirotkin Sworn In | Off Message

From Lobbyist to Legislator: Sirotkin Sworn In 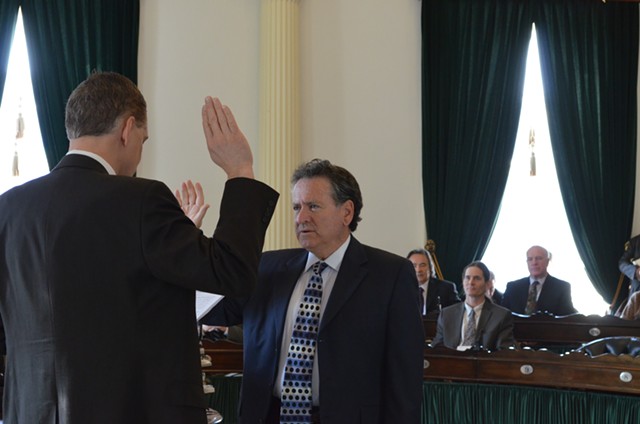 Seat number nine in the Vermont Senate has been vacant for the last month, a visible reminder of the absence of the late senator Sally Fox. On Tuesday morning, her husband of 35 years, Michael Sirotkin, was sworn in, filling the seat in her stead.

The ceremony was poignant but efficient, and moments later, Sirotkin was voting “aye” on the first bill to come before him. The legislation — on the regulation of malt beverages — had been introduced by his wife.

Gov. Peter Shumlin appointed Sirotkin to the position shortly after Fox died of cancer in January, but encouraged him to take several weeks before reporting for duty at the bustling Statehouse. Sirotkin is one of six senators representing Chittenden County.

Sirotkin and other members of the tight-knit body were teary-eyed at Tuesday’s ceremony, but there were moments of levity, too. The newly minted senator recalled an emotional tribute Sen. Dick Sears (D-Bennington) — known for his gruff approach to legislating — on the Senate floor after Fox’s death.

“I’m very proud it was Sally who brought out the teddy bear in Senator Sears,” Sirotkin told his new colleagues.

Sirotkin, a longtime lobbyist, also joked about getting to take a seat at the table, after having spent more than 30 years staking out the perimeter of the Statehouse’s cramped committee rooms.

“For three decades, I’ve best been known around the halls of this building as either lurking or maybe stalking people,” he quipped. Sirotkin has sold his interest in his lobbying firm, Sirotkin & Necrason, to make conflicts of interest less likely.

In an interview after the Senate had adjourned for the day, Sirotkin said his wife left “enormous” shoes to fill. “She would always be on the run, a lot of papers in hand, going to committee, trying to do yeoman’s work,” he recalled. “She worked very hard in this building.”