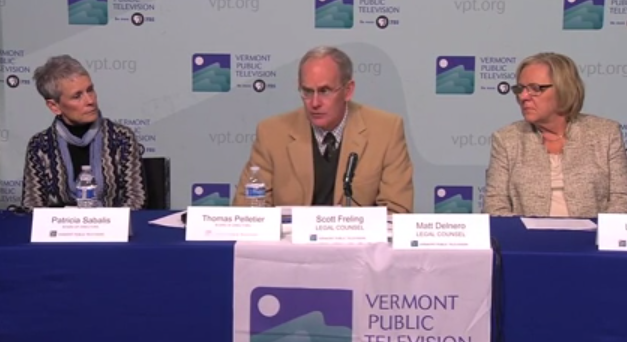 As we reported in this week's Fair Game, Vermont Public Television is facing a Corporation for Public Broadcasting investigation into whether the station's board of directors violated federal open meetings law.

On Friday, the chairman of the VPT board's audit committee, Tom Pelletier, said that a preliminary review conducted by his panel found that the board has, indeed, held closed-door meetings. Pelletier announced the findings at an audit committee meeting held at the station's Colchester headquarters.

"VPT's preliminary review indicates that the VPT board has, from time to time, held conference calls or committee meetings that were not open to the public, in order to address various personnel matters," said Pelletier, who is president and CEO of Northfield Bank. "These meetings were conducted internally because VPT, like many organizations, does not publicly discuss personnel matters."

While such closed-door meetings are permissible if properly warned and documented, Pelletier acknowledged that VPT's board did not always follow proper procedure.

"The open meeting rules further state that following a closed session, the organization should issue a brief written statement identifying 'the reasons for the closing of the meeting,'" Pelletier said. "Our initial review suggests that, in some instances, this procedural aspect of the open meeting requirements may not have been satisfied."

Pelletier said that because the committee's review is ongoing, he would make no further public comment on its findings, except to say that, "We recognize that there have been shortcomings and are committed to addressing them."

After meeting in executive session, the committee unanimously adopted a set of recommendations to the full board, which will take them up at a meeting scheduled for Monday at 9 a.m. at South Burlington's DoubleTree Hotel.

The committee recommended that the board:

The audit committee's internal review is separate from the CPB inspector general's investigation, which is ongoing. VPT staff members spoke out against the board's leadership earlier this week, expressing worry that its actions could result in significant CPB fines for the station. Staff members are expected to reiterate their calls for the board's leadership to resign at Monday's meeting.

Here's a video of Friday's meeting of the VPT board's audit committee: