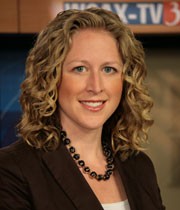 Worcester native Kristin Carlson got her first gig at WCAX-TV as an intern after her junior year at Syracuse University. When she graduated the next year, she recalls, she phoned then-news director Marselis Parsons, who offered her a job on the spot.

"I never even had to put together a resume," she says.

"I've only ever worked for Channel 3," Carlson says. "It's always been my passion. I love reporting — love it. Nothing can ever replace this."

But after GMP approached her about the prospect roughly two weeks ago, she says, Carlson came to the conclusion that working for the power company would bring new challenges and the same pride she feels working for WCAX.

"I've had the privilege of working for a company I respect with people I respect," she says. "This is a similar opportunity. I respect all my interactions with Green Mountain Power and the people there. I'm excited by what they're doing."

In a written statement, GMP president and CEO Mary Powell said she was "simply thrilled that Kristin will bring her expertise to help build the intellectual muscle and innovative skills" of the company's leadership team. Powell said Carlson would help "expand customer communications opportunities and channels" by "maximizing all forms of social and traditional media."

Since she was hired as a part-time weekend producer, Carlson has worked as a producer, reporter, Statehouse bureau chief, senior political reporter and finally co-anchor of "The :30," WCAX's 5:30 p.m. interview show. In 2010, she won an Alfred I. duPont-Columbia University silver baton award for a report on migrant farm workers.

Carlson isn't the first familiar face to go to work for GMP. Terry himself previously served as managing editor of the Rutland Herald. GMP vice president Steve Costello edited the Barre-Montpelier Times Argus and Addison Independent before spending 16 years at Central Vermont Public, which merged with GMP in 2012.

"It's very difficult to replace that much experience over the years in the newsroom," he says. "But we also recognize that people want to do and try new and different things. We're happy with that, too. She's grown. It's time for her. She wants to do something a little different in her life. We respect that, as well."

Tebbetts says he's already put out an ad to hire a new general assignment reporter. He says the station has yet to determine who will replace Carlson on "The :30."

Carlson's last day at WCAX is December 30 20. Until then, she says, she'll steer clear of stories related to energy, politics and any other subjects that might pose a conflict with her new job. She starts at GMP on January 6.