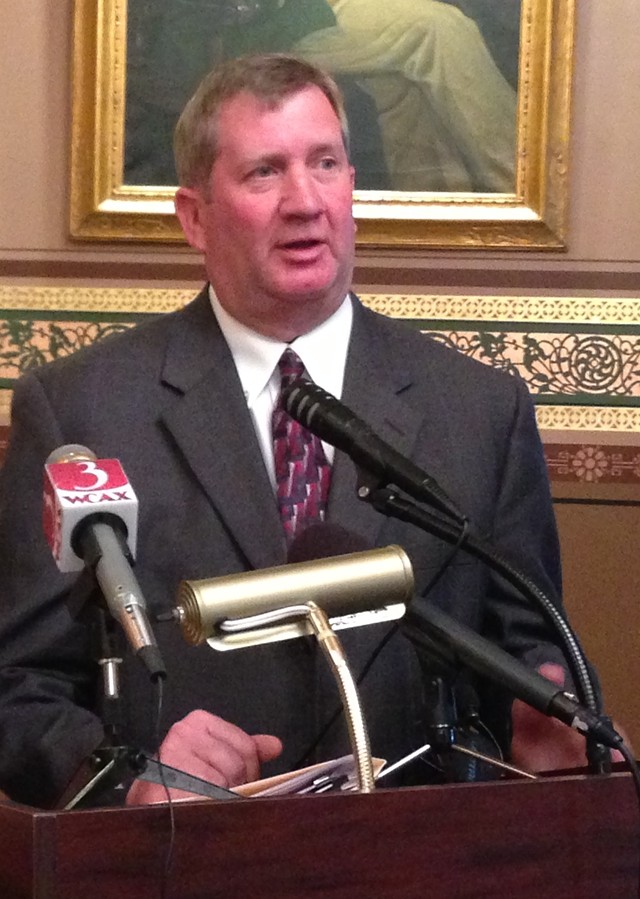 But at least one prominent Burlington politician hopes to step into the void. Rep. Kurt Wright (R-Burlington), a former city councilor and the 2012 Republican mayoral candidate, said Monday he plans to run for the New North End seat Aubin is relinquishing.

"I've told people I'm just crazy enough that I happened to enjoy my time on the council," said Wright (pictured above right). "And I still think I have something to contribute. So I'm going to see if the people of Ward 4 also think I can contribute."

Though the next city council elections won't take place until Town Meeting Day in March, Burlington Democratic Party bylaws required those hoping to run to submit their names to the party by last Friday. According to the chairman of the city party, David Scherr, that's when Aubin and Worden formalized their decisions to step down.

"It definitely makes our task a little tougher," Scherr said of his party's quest to maintain its plurality on the council. "Our row is a littler harder to hoe here. But I think we have good candidates who have already announced their interest in running."

Each spring, half the council's 14 seats — one from each of the city's seven wards — are up for grabs. Councilors are elected to two-year terms. Democrats currently control seven seats on the council, while Progressives hold four, independents two and Republicans one.

According to Scherr, the third Democratic incumbent up for reelection next spring, Chip Mason (D-Ward 5), plans to run. Max Tracy (P-Ward 2), one of two Progressives whose terms are set to expire, said Monday that he, too, will run. The other, Rachel Siegel (P-Ward 3), could not immediately be reached, nor could Ward 6 independent Karen Paul. [Updated Tuesday at 12:10 p.m.: Ward 6 independent Karen Paul says she plans to seek reelection.]

Aubin's and Worden's decisions to step down are particularly surprising, given that both only recently joined the council. Aubin was first elected in March 2012, when Wright gave up his Ward 4 seat to run for mayor. Worden won a special election in November 2012 after former city councilor Ed Adrian resigned his seat.

The two Democrats and Decelles all said family and professional obligations played major roles in their decisions to step back from city government.

"You know it's a little hard to come home from a meeting at 10:30 or 11 at night and start to correct papers," said Aubin, who teaches social studies at Mount Mansfield Union High School. "I've got a two- and a four-year old. It just gets a little hectic after a while."

"It's just competing priorities in my life, and I need to focus my energies on work commitment, family commitments and some other personal endeavors," he said. "It's been a tough decision. Certainly it's been an enjoyable term working on the city council."

Decelles, who was first elected in 2006, said he's spent the vast majority of his 10-year-old daughter's life serving on the council.

"I've given eight years," he said. "Now it's time to spend more time with my wife and daughter."

While Decelles acknowledged that Burlington's politics have "become pretty liberal" in the years since he was first elected, he said his status as the last Republican standing "didn't have any bearing" on his decision to step down.

"As long as I've done this, I've been in the minority," he said. "I'm also a Yankees fan, so I'm used to minority status anyway."

Decelles said that while the Burlington Republican Party has not yet settled on who will run for his seat, "We're looking at several different people."

According to Scherr, four Democratic newcomers submitted their names before Friday's deadline to run for various seats. He said Molly Loomis plans to run for Worden's Ward 1 seat, Carole Ode and Jim Holway will compete for Aubin's Ward 4 seat and Bianka LeGrande will run for Decelle's Ward 7 seat.

Democratic nominations will be settled at a trio of caucus meetings scheduled for next week.

As for Wright, he says he's missed serving on the council since he stepped down in 2012. For much of the past year, he's been a constant presence at Contois Auditorium during council meetings — speaking out on budget issues, redistricting and the proposed basing of F-35 fighter jets in Vermont.

"I have to say it's sometimes frustrating to me because I'll be in the audience and I'll be thinking about what I would say if I were up there," he said.

Wright was quick to say that a return to the city council would not presage another mayoral bid. Since he first ran for the council nearly 20 years ago, Wright has run for mayor three times, all unsuccessfully.

"Somebody may say, 'Kurt's planning his next mayoral campaign,' " Wright says. "There will never be another mayoral campaign. I'd be crazy to run for mayor again. I've had my shot. It has nothing to do with that."