Sanders to Travel South With Democratic Super PAC | Off Message

The anti-Citizens United senator teams up with a super PAC to tour Mississippi, Alabama, Georgia and South Carolina. 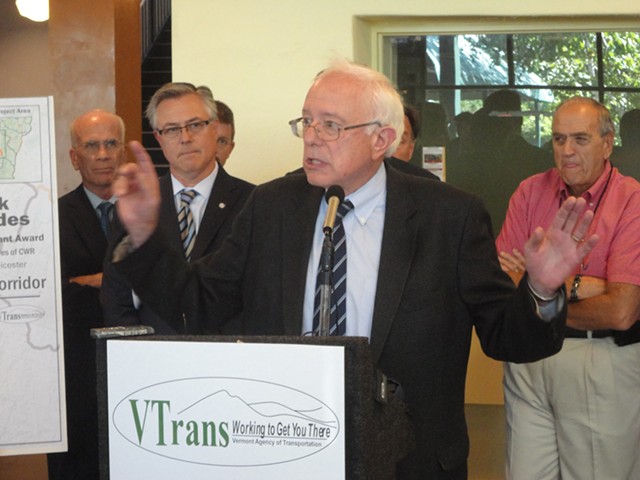 After sitting in on the U.S. Supreme Court's oral arguments for a major campaign finance case Tuesday morning, Sen. Bernie Sanders (I-Vt.) stood outside the court and railed against the influence of super PACs in American politics.

Next week, however, Sanders plans to join forces with a Democratic super PAC for a three-day, four-state tour of the southern United States. Organized by South Forward, Sanders' "Fight for Economic Justice Town Hall Meetings," will take him to Jackson, Miss., Birmingham, Ala., Atlanta, Ga., and Columbia, S.C.

"It's just a great opportunity and the response has been overwhelming," says South Forward executive director Jay Parmley, who says he expects between 150 and 200 people to attend each of Sanders' town hall meetings. "I think he'll be able to provide a shot in the arm for progressives and a shot in the arm for Democrats."

Founded in January 2013, South Forward is dedicated to "building the Democratic bench" in 14 southern states, Parmley says, focusing specifically on down-ballot races for mayor and the state legislature. According to its website, one of the organization's three fundraising entities is a federal independent expenditure political action committee — or, super PAC — which can raise unlimited funds from individuals and corporations.

"Technically we are a super PAC, yes. But I hate that term because we don't have enough money to be that super," Parmley says.

The group expects to raise between $150,000 and $200,000 this calendar year, he says. Its largest contributions to date have included $10,000 from the American Association for Justice (formerly known as the Association of Trial Lawyers of America) and roughly $8000 from the Laborers' International Union of North America.

Sanders' staff declined to answer specific questions about why the anti-super PAC senator is working with a super PAC and which entity is paying for the trip, but Parmley says he believes Sanders' leadership PAC is footing the bill.

In a general statement provided to Seven Days, Sanders' finance director, Ben Eisenberg, said the senator is traveling south "to discuss the economic and political challenges facing working people — and how we respond."

"He believes that progressives can win elections in the south and in other Republican states in 2014 and beyond, but only if efforts are made to educate and organize working people," Eisenberg said. "Bernie's 'Economic Justice' tour is just that — an effort to bring a progressive, pro-worker message to southern voters."

According to Parmley, Sanders contacted South Forward over the summer and asked whether he could travel south to hold town hall meetings with the group. Parmley says the group was "ecstatic" at the opportunity.

"There's not a better voice in terms labor issues, economic justice issues, health care, Medicaid, Medicare, veterans issues," he says. "Those issues really resonate, but nobody comes to the south and speak to those things because we mostly have Republicans elected to office."

Is there really a market for a self-described socialist from Vermont in Mississippi and Alabama?

"The answer to that question is yes. There is a market for real debate," Parmley says. "The fact is, this is a great opportunity for us to have someone who articulates what I would call 'bread and butter' issues."

Whether the southern tour will go off without a hitch remains to be seen. It's scheduled for next Wednesday through Friday, during which time Congress may still be debating a resolution to the government shutdown and debt ceiling debacle.

"The fate of this trip is obviously dependent upon the schedule in Washington as a result of the Republican shut-down of government and threats not to pay our bills," Eisenberg says.