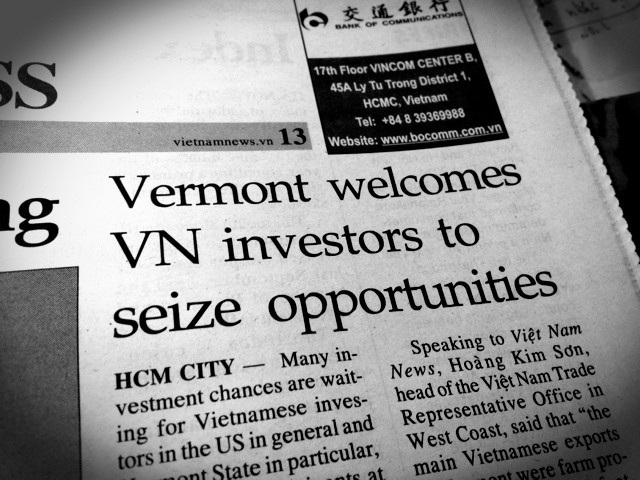 Back from an eight-day trip to Asia to court foreign investors, Gov. Peter Shumlin and Jay Peak Resort president Bill Stenger say the mission was a resounding success.

"I'm not prone to hyperbole on this kind of stuff, but it did exceed what I had hoped for," Stenger says. "I was confident it was going to be a good trip, but it turned out even better than I thought."

The delegation, which included Shumlin, Secretary of Commerce Lawrence Miller and an Agency of Commerce employee, met with more than 500 potential investors in four Chinese and Vietnamese cities, Stenger says.

He believes those meetings could result in $50 million worth of investment for Stenger's various Northeast Kingdom development projects. Those include expansions at Jay Peak and Burke Mountain, a biotechnology facility in Newport and other downtown redevelopment projects on Lake Memphremagog.

According to Stenger, the group traveled to Beijing, Shenzhen, Ho Chi Minh City and Shanghai. In each city, they held seminars about Vermont's use of the federal EB-5 immigrant investor program and met with immigration attorneys. Shumlin also met with Gary Locke, the U.S. ambassador to China.

"There were big crowds. It was very well organized," Shumlin says. "Anything I can do to create good-paying jobs up there is in all of our interest."

Stenger's projects are almost entirely funded by foreign investors seeking U.S. green cards. Under the EB-5 program, wealthy foreigners can invest $500,000 in designated development projects in exchange for legal residency for them and their families.

While Shumlin and Miller are barred by federal securities law from pitching specific investments, they were able to promote Vermont's unique oversight of EB-5 projects in the state. And that, Stenger and Shumlin say, sent a powerful message to those with whom they met.

"In their world, the government is power," Shumlin says. "So therefore, when you show up and explain it's the only regional program in the nation where our necks are on the line, where the elected officials actually run the EB-5 program, manage it and screen the projects, that's a whole new world for them."

In a sign of the trip's success, Stenger says, five investors signed up on the spot, which he says is atypical. He expects roughly 100 people who attended the presentations to eventually invest in the Northeast Kingdom projects.

Stenger says he picked up the tab for the three state officials who joined him on the trip. The state paid for Shumlin's security detail.

"Obviously the alternative would be the state would pay for it," Stenger explains. "Which I don't think is appropriate, because they're working on behalf of a private enterprise project."