Sanders and Welch Praise Prospect of Peaceful Resolution in Syria 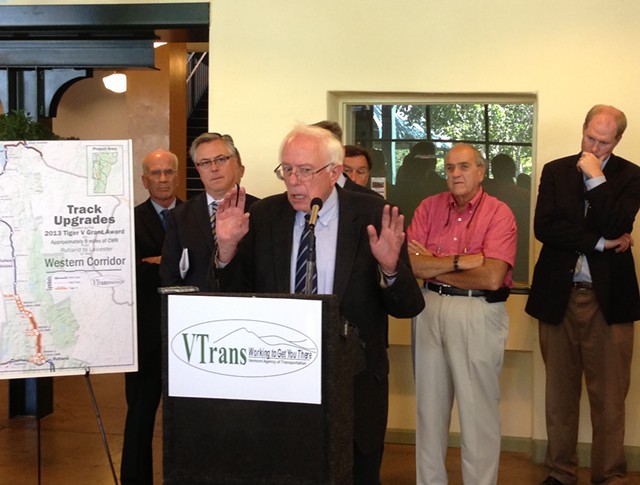 * Updated below with new comments from Sen. Patrick Leahy *

Sen. Bernie Sanders (I-Vt.) and Congressman Peter Welch (D-Vt.) voiced a cautious optimism late Monday that the United States might yet find a peaceful resolution to its standoff with Syria.

The comments came after a frenetic day of diplomacy and public relations, in which U.S. and Russian officials signaled a willingness to avert a showdown by convincing Syria to surrender its chemical weapons to international monitors. That development prompted Senate Majority Leader Harry Reid (D-Nev.) to postpone a test vote previously scheduled for Wednesday on whether to strike Syria.

In a written statement released late Monday, Sanders said he "appreciate[s] that the majority leader delayed a vote and that President Obama is prepared to work with Russia to have Syria turn over control of its chemical weapons to international monitors."

While Sanders has yet to explicitly state his opposition to Obama's proposed strikes, he has expressed grave reservations about the prospect in countless interviews with the national news media.

"Most Americans would support an effort that could remove chemical weapons from Syria without American military involvement in another Middle East war," he continued in the statement. "I urge the president and Russia to work vigorously to achieve that goal."

"That's great. We don't know how solid that's going to be," Welch said when asked by a participant about the prospect of a deal with Russia, adding, "That would be fabulous."

Several other Vermonters raised the notion of a peaceful solution during the call. One man, who identified himself as Adrian from Pawlet, said, "The news today of the offer from [Syrian president Bashar] Assad and the Russians is, I think, a major development, and it's showing the situation is dynamic and in flux."

"It is dynamic," Welch replied. "There have not been any reported uses of chemical weapons since August 21. I actually do think this debate is putting Assad on notice."

Later in the call, Welch said, "This news of Russia getting involved? Let's jump on it real hard. And the president indicated he would."

In a telephone town hall meeting, candidates and office holders use software that auto-dials tens of thousands of home telephone numbers and plays a short, recorded message inviting recipients to take part in the call. Those who accept are transferred to a conference call hosted by the politician. Callers can ask questions, but only after their comments are screened by members of the politician's staff.

Welch spokesman Ryan Nickel declined to say Monday night how many phone numbers Welch's office auto-dialed, but the congressman himself said during the forum that "5000 Vermonters have been on for some length of time — some shortly and some from the beginning." Nickel also declined to disclose the cost of the call.

Welch spent much of the session reiterating his ambivalence about the proposed strikes. For the past week, he has told reporters he's as worried about the U.S. getting involved in Syria as he is worried about failing to signal disapproval at the use of chemical weapons.

Given his straddling of the issue, Welch managed to agree with most callers Monday night, whether they supported or opposed the proposed strikes.

The third member of Vermont's congressional delegation, Sen. Patrick Leahy (D-Vt.) did not publicly address Monday's developments. Like Welch, Leahy has remained neutral on the issue of airstrikes.

In a written statement released by his office Tuesday afternoon, Leahy joined his Vermont colleagues in hailing steps toward a peaceful resolution to the Syrian standoff.

"It is encouraging that President Obama’s strong condemnation of Bashar al-Assad's heinous war crime apparently has moved Syria toward conciliation on its chemical weapons stockpile," Leahy said. "Everyone seems to be taking a deep breath."

"But," he continued, "we need to see verifiable action by the Syrian regime to relinquish control of its chemical weapons arsenal and agreement to other conditions. It is appropriate that the President intends to call on the United Nations to help broker a solution that can be agreed to by all governments of conscience."