In this week's Fair Game, we brought you word of another big-money fundraiser for a member of Vermont's congressional delegation.

Sen. Patrick Leahy has invited out-of-town guests to Burlington to "experience the world-renowned beauty of Vermont at his Fall Foliage Retreat," according to the invitation.

Anyway, here's the invite, in case you want to RSVP: 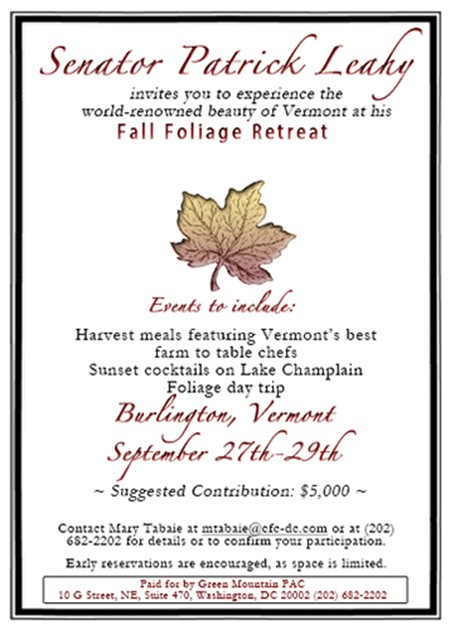 This isn't your only opportunity in the coming months to spend a cozy weekend with a member of the Vermont delegation. As we reported a few weeks ago, Congressman Peter Welch is holding a fundraiser for D.C. lobbyists and political action committee representatives at the Woodstock Inn in August. (If you're looking to comparison shop, here's what Welch's invite looked like.)

According to Dwyer, the fall foliage retreat is Leahy's first such fundraising event in Vermont. Typically, she says, he holds them in D.C.

"The only difference from our perspective is rather than doing this event in D.C., we're bringing the business to Vermont and using the opportunity to showcase Vermont," she says. "Many other members [of Congress] do these sorts of events. We're not the first ones to do this."

Are you on Vermont politicians' fundraising lists? If so, feel free to forward similar invites our way (paul [at] sevendaysvt [dot] com) and we'll post them in this space.