Sanders finds himself on the lonely end of a 97-1 vote. 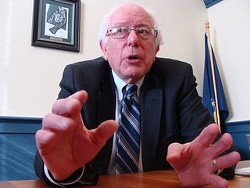 One may be the loneliest number, but it seems to be Sen. Bernie Sanders' favorite.

The vote was 97 to 1, with two senators absent.

So what got under Sanders' skin?

A Tuesday story in Politico with the provocative headline, "On Penny Pritzker, where's the outrage?" reporters Alexander Burns and Burgess Everett list plenty of good reasons to vote no. They note that she "understated her income by tens of millions of dollars, clashed openly with organized labor, benefited from offshore tax havens and invested in financial instruments that helped precipitate the 2008 financial meltdown."

(Burns and Everett also point out, incidentally, that Sen. Chuck Grassley, the Iowa Republican, appeared to be the only one who'd vote no — though, of course, their prediction wasn't quite on the mark.)

For Sanders, it seems to be her labor record — specifically, that of the Hyatt Hotel chain, which her family founded and on whose board she serves. As CNN reported in May, the hospitality union UNITE HERE called Hyatt "the worst hotel employer in America."

"We need a secretary of commerce who will represent the interests of working Americans and their families, not simply the interests of CEOs and large corporations," Sanders said in a statement explaining his vote. "Ms. Pritzker served on the board of one of the most anti-worker hotel chains in this country. Workers at Hyatt have been unjustly fired for trying to form a union to collectively bargain for better wages and benefits. Unfortunately, Ms. Pritzker chose not to defend those employees."

If Sanders voting against an Obama cabinet appointee sounds familiar, that's because he's done it a lot — at least for someone who caucuses with Senate Democrats.

This year alone, Sanders opposed the confirmations of Treasury Secretary Jacob Lew and CIA director John Brennan. During Obama's first term, he opposed Lew's confirmation as director of the Office of Management and Budget, as well as:

And not to get real nerdy on you, but soon after Sanders cast his 'nay' vote on Pritzker's confirmation Tuesday afternoon, New York Times interactive news developer Derek Willis noted on Twitter that "Bernie Sanders has been the single Senator to vote No at least once in each of the four congresses he has served in (110-113)."

In other words, at least once every two years since Sanders was elected to the Senate in 2006, he's found himself all alone in at least one roll call vote — and no other senator has done the same.

Which is interesting. Kind of.