A Question of Tediousness: Baruth Calls for Galbraith to Simmer Down | Off Message

A Question of Tediousness: Baruth Calls for Galbraith to Simmer Down 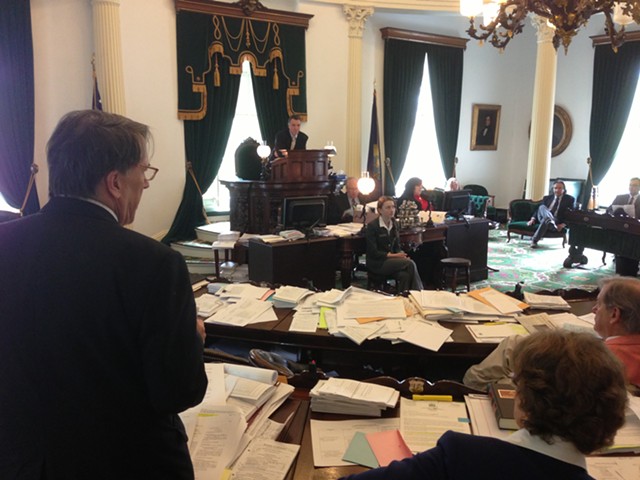 An hour after Sen. Peter Galbraith (D-Windham) took to the floor Friday morning, his colleagues were on the verge of bum-rushing him.

With the Senate hoping to adjourn the next day, Galbraith (pictured at right) was making good on his pledge to stall the body's business in order to protest a campaign finance bill he has taken to calling "a sham."

His colleagues, whose criticism of Galbraith is no longer off-the-record nor behind his back, had mostly drifted out of the room. But the Windham County senator kept at it, interrogating to no end his seat-mate and district-mate, Sen. Jeanette White (D-Windham), who had written an earlier draft of the bill.

White was hoping to send the legislation to conference committee, where discrepancies between House and Senate versions could be worked out in time to be signed into law this year. But Galbraith, who says portions of the bill are unconstitutional and indefensible, was hoping to amend the bill or run out the clock.

All of the sudden, the mild-mannered majority leader, Sen. Phil Baruth (D-Chittenden), stood up across the room to make a point of order. Describing it as "an airtight procedural motion," Baruth secured permission from the presiding officer, Lt. Gov. Phil Scott, to quote from Mason's Manual of Legislative Procedure and the Merriam-Webster dictionary.

"An ancient rule governing debate is that, quote, 'No one is to speak impertinently or beside the question superfluously or tediously,'" Baruth said. "I would rest my motion on the word 'tediously,' which means 'tiresome because of length or dullness.' The reason why I believe it to be airtight is that I believe the senator has spoken tediously, and I believe the lieutenant governor would have two options: to uphold my motion or to rule that this has not been tedious—"

"Mr. President, is this a debatable proposition?" Galbraith interjected.

"No it's not," Scott said and then declared a brief recess.

As senators converged before the dais to discuss the matter, tempers flared and Sen. Dick Mazza (D-Grand Isle) lit into Galbraith, telling the Windham County senator that nobody was listening to him and nobody cared.

After reconvening the Senate, Scott said, "Your point of order is not well-taken. I think that it's a bit subjective for me to determine whether something is tedious or not and I'm afraid of the door that would open in the future."

"I thank you," Baruth said, and then the tediousness resumed.

In the end — after another 20 minutes of impertinence and superfluousness — Galbraith stood alone. The Senate voted 27 to 1 in favor of sending the bill to conference committee, from which it may or may not emerge in time for final passage.

Outside the Senate chamber, Galbraith was pressed by reporters about why he would devote so much time to a futile quest to stall the inevitable, while only succeeding at driving his colleagues bonkers.

"I think it's a very bad bill," Galbraith said.

His goal, he explained, was to delay its passage until next year — at which point it would be too late for the legislation to take effect during the 2014 election cycle. That, he said, could spare the state an expensive lawsuit filed by those who believe that limitations on what a super PAC can raise would be struck down by the courts.

Furthermore, he concluded, "I think the existing law is better than this law."