Amid Calls for Campaign Finance Reform, the Vermont Legislature is Poised to Make it Worse | Off Message

Amid Calls for Campaign Finance Reform, the Vermont Legislature is Poised to Make it Worse 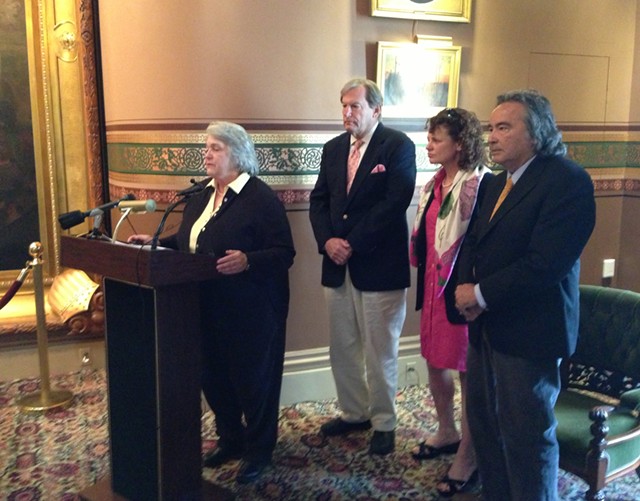 "Our representative democracy is broken," Sen. Ginny Lyons (D-Chittenden) told reporters at a Statehouse press conference Thursday morning. "As we look at Washington and ask Washington for help, we're frequently met with closed doors. But those doors are very much open to the influence of corporate money."

For that reason, Lyons said, Vermont must once again call for a constitutional amendment reversing Citizens United and other recent U.S. Supreme Court decisions that abolished limits on corporate spending in politics.

But as Sen. Nero fiddled, Rome was burning all around her.

Just a day before Lyons' press conference, the Vermont House voted 96 to 49 in favor of a so-called "campaign finance reform" bill that actually increases the amount individuals, corporations and unions can donate to statewide candidates, political action committees and parties.

Under the guise of stemming the flow of special interest money into Vermont politics, the House further opened the floodgates. And it didn't even consider the one provision that could realistically reduce corporate cash in Vermont: banning direct corporate contributions to political candidates.

That provision was debated at length in the Vermont Senate earlier this year, only to be included and then removed from that body's version of the campaign finance reform bill. Ironically, two of the three senators who spoke at Thursday's Citizens United press conference — Sen. Bob Hartwell (D-Bennington) and Lyons herself — voted last month against barring direct corporate contributions to candidates.

Both admitted at the press conference that they themselves have accepted such contributions to their own campaigns.

Asked how they could be taken seriously when they refuse to support the one realistic step the legislature can take to crack down on special interest cash in Vermont, Lyons said, "Direct contributions, which can be regulated, are really not the problem."

She added, "We know we can regulate direct contributions and we do that. We set limits on that — and then we know who's giving to whom. We can see that money and then increase or decrease the amount that's given from one individual corporation to a candidate."

Okay, sure. But then why is the legislature poised to increase the amount corporations can give to candidates?

Under current law, they — along with individuals and labor unions — can donate $2000 per election cycle to any Vermont political candidate. The Senate voted last month to increase that to $3000 for statewide candidates; the House voted yesterday to increase it to $4000.

Political action committees and parties, meanwhile, are currently allowed to raise $2000 per cycle from a single source. The Senate wants to increase that to $3000, while the House wants $5000.

And while the Senate tried to crack down on how much parties can spend on candidates and how much an individual donor can spend on all candidates in a single election cycle, the House removed both provisions.

That has Rep. Kurt Wright (R-Burlington) calling the House version, which he voted against, "the anti-transparency bill."

"If an individual now wants to give to a particular candidate and they don't want to be known, they can now just go through the party," Wright says.

Adds Rep. Chris Pearson (P-Burlington), "You're setting up a situation where a party can recruit a candidate, hand them a check and say, 'Go!' I think that's outrageous and disappointing."

Vermont Public Interest Research Group executive director Paul Burns says he's glad the House passed some version of the bill so the process can continue to move forward, but he hopes the legislature's final version will more closely mirror the Senate's.

"We think the House language in too many areas actually increases the influence of money in politics and indeed the amount of money in politics," he says. "And that violates our principle of, 'First do no harm' when it comes to campaign finance reform."

House Speaker Shap Smith (D-Morrisville) defends his body's work, arguing that if lawmakers enacted strict fundraising caps on themselves, the courts would swiftly strike them down.

"The most significant aspect of this bill is it puts in place limits that are likely to survive court challenge with regard to candidates for House, Senate and statewide offices, and I think that's critically important," he says.

But Smith doesn't seem so concerned about a provision of the House bill that will definitely draw a court challenge: the headline-grabbing plan to restrict super PACs from raising more than $5000 per donor. Gov. Peter Shumlin, who addressed the subject during a Wednesday press conference, also seemed blasé about the threat of protracted litigation.

And that provides a clue about the end-game for this particular piece of legislation: Either Smith and Shumlin are confident the Senate will strip out the super PAC provision before sending it to the governor's desk or they're confident that the legislature's continued foot-dragging this session — and renewed controversy over that provision — will keep the bill from reaching the governor's desk at all.

Which would be just fine by them.

The fact is that despite all their anti-Citizens United rhetoric, Smith, Shumlin and Senate President Pro Tem John Campbell (D-Windsor) have all resisted enacting meaningful campaign finance reform this session — and they've been aided and abetted by Democratic super-majorities in the House and Senate.

All three men worked behind-the-scenes and not-so-behind the scenes to kill the one provision that really mattered: the ban on direct corporate donations. And that should come as no surprise. After all, Shumlin raised some $250,000 from corporations last cycle, while PACs run by Smith and Campbell raised tens of thousands each — and funneled that money to members of their respective caucuses.

So if you're expecting state government to heroically limit the influence of money in politics this session, don't bother. Just sit back, relax and listen to the fiddle play.