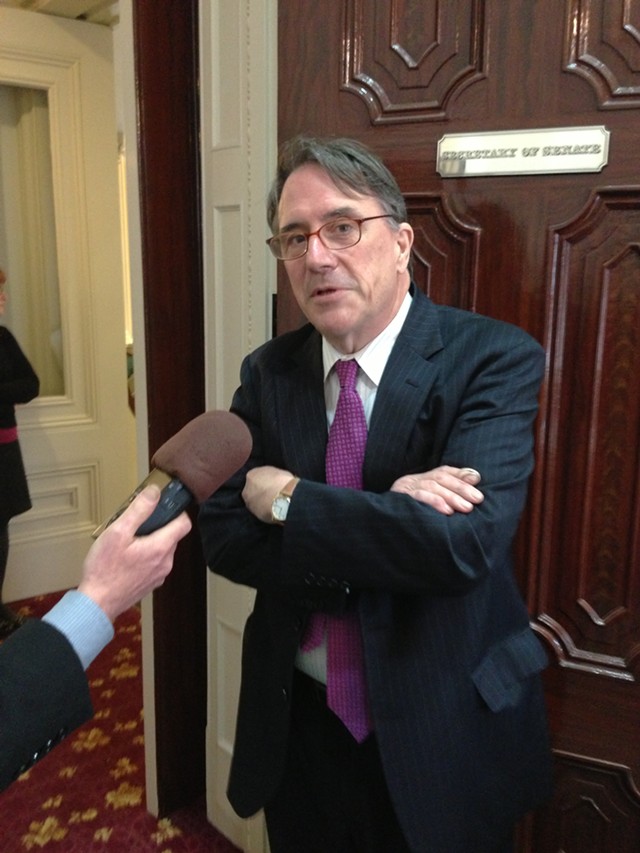 A years-long debate over whether to update the state's campaign finance laws came to a surprisingly swift close in the Vermont Senate Friday morning. With hardly a word of discussion, the body voted 24 to 3 to send an ambitious, 50-page bill forward to final passage.

"That was kind of the sound of a logjam breaking," said Vermont Public Interest Research Group executive director Paul Burns.

That's not to say it was an easy lift.

The bill was almost derailed several times — including as recently as Thursday evening, when Democrats meeting in caucus debated whether to strip out a previously passed amendment banning corporate contributions to candidates. Two weeks before, the bill had been abruptly pulled from the floor after senators unexpectedly approved that amendment by a 21 to 8 margin.

"I'm pleasantly surprised, given the tortured history of the bill," said Sen. Peter Galbraith (D-Windham), whose two-year quest to ban such contributions has irritated the hell out of many of his colleagues. "I think it sends a very clear signal that Vermont wants to ... have clean elections."

In brief remarks explaining his vote in favor of the overall campaign finance bill, Senate President Pro Tem John Campbell said he nevertheless strongly objected to Galbraith's amendment. He argued that because employees of a corporation could still donate to candidates through independent political action committees, the ban would simply result in masking corporate influence — not ending it.

"The reality is, it takes away from transparency when it comes to corporate donations, while only truly restricting small, local businesses," Campbell said.

His remarks represent a second major turnaround for Campbell on the issue. While he opposed Galbraith's amendment last year, he was one of the 21 senators who voted for it two weeks ago. Now he's clearly back in the anti camp.

Snelling explained on the Senate floor that while she strongly supported many provisions of the bill, she could not vote in favor of the ban on corporate donations.

"I thoroughly object to the premise throughout this bill that Vermont is like Washington and that the contributions on the local level can cause Vermont candidates to be corrupt," she said. "I have yet to see any evidence that this is so."

Final passage of the bill is expected in the Senate next Tuesday, at which point the baton will be passed to the House Government Operations Committee.

In addition to banning corporate contributions, the bill would:

Sen. Jeanette White (D-Windham), who wrote the bill and has been fighting to pass it for years, says she is pleased the Senate finally moved it forward — even though she opposed the Galbraith amendment.

"It's like the budget," she said. "Everybody can find something in there to hate, but in the overall bill, I think we did a good job."