Is This the Year for Legalizing Hemp Production in Vermont? | Off Message

Is This the Year for Legalizing Hemp Production in Vermont? 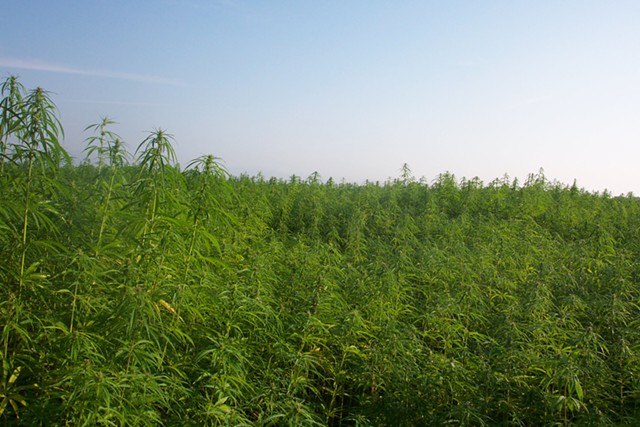 In 2008, Vermont lawmakers threw their support behind the industrial production of hemp, a variety of cannabis that can be refined into food, fuel and fiber. The only problem? The so-called hemp bill made abundantly clear that Vermont would hold off on licensing or permitting any hemp farming until federal laws no longer prohibited the practice.

Five years later, federal law hasn’t changed, but that isn’t stopping some Vermont legislators and lobbyists from reviving the hemp bill. S. 157, which passed on a voice vote in the Senate yesterday and now heads to the House, strips out some of the language and restrictions that proponents say too closely conflated hemp with its controversial cousin marijuana. More significantly, though, the updated bill would allow the Vermont Agency of Agriculture, Food and Markets to begin issuing permits to raise hemp without any change in federal law.

Even with a state permit in hand, farmers would run the risk of federal prosecution for growing hemp. Their property could be seized, and they could lose federal aid under the Farm Bill. But Robb Kidd, an organizer with Rural Vermont who is pushing hard for hemp production in the state, says that hasn’t dissuaded a few farmers from telling him they’d be lined up on day one for their permits.

“There are folks out there who will take the risk,” says Kidd.

Sen. David Zuckerman (P/D-Chittenden), the vice-chair of the Senate Agriculture Committee, warns that farmers would have to think carefully — and probably set up legal barriers — before planting hemp. But then again, he says, “The federal government is facing budget cuts, the state government is facing tight budgets, and law enforcement as far as I would gather are going to be focused on actual drug problems.”

Proponents say agricultural hemp could be a boon for Vermont farmers. Rural Vermont and the Vermont Sustainable Jobs Fund estimate the crop could bring in between $2000 and $3000 an acre for farmers. Hemp is a good crop to use in rotation with corn, a crop grown extensively by dairy farmers in Vermont for feed, and can help kill weeds in fields naturally, without the use of herbicides.

For farmers who want to transition to organic certification, hemp could serve as a transition crop during the three years fields need to be free of chemical herbicides and pesticides. Hemp also makes sense in fields prone to flooding; while hemp can't be used for food products after being contaminated by flood waters, it can have a useful — and profitable — life as other, non-edible products. Traditional food crops, by contrast, can be a total loss after flooding.

The crop could also be turned into a profitable value-added product: hempseed oil. Farmers who are equipped to make sunflower or canola oil already have the equipment necessary to produce hempseed oil.

“I hear jokes about, ‘Oh, are you going to smoke that?’” says Kidd, who notes that there’s still a lot of confusion nationwide about the difference between hemp and marijuana. But by and large, Kidd says, Vermont policy makers understand that difference. The concentration of THC, the principle psychoactive compound in marijuana, exists in such low concentrations in hemp that the plant can’t be used to get high.

Even so, Kidd says that Vermont’s original hemp bill — in an effort to appease opponents — didn’t make that distinction between pot and hemp clear enough. The bill calls for criminal background checks for any farmers who wish to grow hemp, and would have required farmers to register the exact coordinates of their farm fields. The result, Kidd says, is that even though hemp isn’t a drug, it was treated like one.

Netaka White, the bioenergy program director with VSJF, says S. 157 is a big improvement in that regard. “It places hemp where it really is, or where it needs to be, which is as an agricultural crop, not a drug,” he says.

The Senate ag committee, which introduced S. 157, took testimony from the Department of Public Safety on the legislation. While DPS neither supported nor opposed the legislation, Commissioner Keith Flynn did indicate to lawmakers that law enforcement officials in Vermont have bigger fish to fry — for example, crimes related to opiate abuse.

Vermont isn’t alone in investigating hemp production, and nationwide the push for growing hemp has bipartisan support. Kentucky legislators earlier this week approved a bill that would establish a framework for a legal hemp industry in the Bluegrass State, and Republican Sen. Rand Paul is promising to seek a wavier from the Drug Enforcement Administration in order to speed along hemp development in his home state.

If anything, hemp is a throwback crop rather than a trailblazing new addition to the ag landscape. During World War II, the U.S. Department of Agriculture rolled out a film called "Hemp for Victory" extolling the virtues of the crop. Domestic hemp production was crucial after war with Japan cut off Asian supplies to the United States. At one point U.S. farmers cultivated an estimated 400,000 acres of hemp. Today more than 30 countries produce industrial hemp, including Canada.

Zuckerman, Kidd and White all say they’re moderately optimistic about S. 157’s odds as it heads to the House. As the debate over decriminalization of marijuana continues in Vermont, Kidd says it’s only common sense to forge ahead with hemp cultivation. “If you’re going to allow folks to smoke marijuana, why don’t we allow farmers to grow hemp that will bring an economic benefit to the state?”