Not-Quite-Breaking: Shumlin Says He's Not Running for President | Off Message 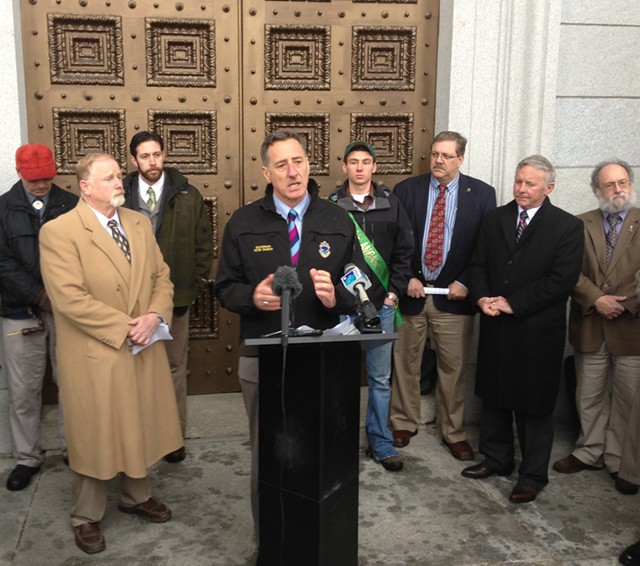 OK, I mean, not that I think Gov. Peter Shumlin would run for president. Nor do I think he'd stand a chance.

To be more precise, Martin pegged Shumlin as one of several Democratic governors who are "ambitious politicians boasting records that would probably play well with primary voters in 2016." Folks whose presidential ambitions would be stymied by another run by former secretary of state Hillary Clinton.

"[Martin] O’Malley is the second-term Maryland governor who has been perhaps the most open about his 2016 ambitions, but whose prospects are largely out of his hands as long as Clinton looms on the horizon. Count New York Gov. Andrew Cuomo, Delaware Gov. Jack Markell, Missouri Gov. Jay Nixon, Massachusetts Gov. Deval Patrick, Vermont Gov. Peter Shumlin and [Colorado Gov. John] Hickenlooper himself on that same roster of accomplished Democratic governors who are younger than the 65-year-old Clinton but could find themselves stuck in their state capitals for another decade-plus should she be elected president.

Later in the piece, Martin writes this:

Shumlin, without fully denying his own ambitions, was blunt about what Clinton meant for the Democratic race.

Without fully denying his own ambitions?! OMG! Sounds like he's running for prez!

But at Shumlin's first press conference since his D.C. trip wound down, we couldn't resist giving Shummy a chance Wednesday to definitively put to rest such fanciful rumors.

"So you are categorically never running for president?" we asked.

"I am not running for president of the United States," he said. "I gotta tell you, and this is not a hit on my Democratic governors, because both Democratic governors and [Republican] governors who I sat with this week — there seem to be a disproportionate number of them that suffer from the disease that they won't lead a fulfilling life unless they go to 600 Pennsylvania Avenue. I don't suffer from that disease."

Shumlin paused, looked over at a group of staff members and asked, "Is it 600?"

"16? 616?" Shumlin said to chuckles. "You can see how much I've thought about running for president!"

"That's all right with me," Shumlin responded.

"So is 'not' the same thing as 'never?'" VTDigger.org's Anne Galloway asked.

"Wow," Shumlin said. "I am not running for president of the United States. I love being governor of the state of Vermont. I'm hoping Vermonters will let me be governor for a while so we can continue to get tough things done."

"Can you say you are 'never' running for president of the United States," the Associated Press' Dave Gram pressed.

Chuckles from the press corps continued to abound.

"I am never running for president of the United States," Shumlin said.

"You said you are running for govenor, though?" the Vermont Press Bureau's Peter Hirschfeld clarifed.

"We do that often in Vermont," Shumlin said, trying his best to draw the presser to a close. "Hey, thank you."

Alas, this Seven Days reporter couldn't seem to let it go, saying: "Are you, uh, never running for Senate?"

"While we're at it!" the pesky Seven Days reporter explained, suddenly feeling like a tool. "I'm just, you know, killing time."

"Or secretary of state?" Green Mountain Daily's John Walters asked, likely to tweak Secretary of State Jim Condos, who was also in attendance.

"Secretary of state?" Shumlin said. "Let me be very clear…"

"I wanna know about that," Condos jumped in.

"I really — I was reinforced this last trip down there, my favorite part of going to Washington, D.C., is getting on the plane to come home to Vermont," Shumlin said. "I'm not kidding you. I'm a Vermont boy. I don't think you'll ever see me living in Washington, D.C."

"Thank you," Shumlin spokewoman Sue Allen said, putting an end to the press conference and preventing the press from asking whether Shumlin might be running for high bailiff or dog catcher.