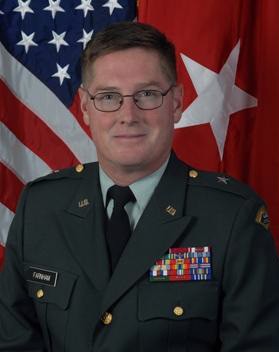 *Updated below with reaction from House Speaker Shap Smith and other legislators.*

Retired Brig. Gen. Jonathan Farnham withdrew from the race to lead the Vermont National Guard Monday afternoon, citing an inability to defend himself against charges leveled at him in an unsigned letter purportedly from a former Guard member.

The letter, which was circulated among top lawmakers last week, includes allegations that Farnham and another senior officer failed to immediately report or take action to address an alleged sexual assault committed by one member of the Guard against another in December 2007.

In a statement to Seven Days, Farnham (pictured) said that while the Guard's privacy rules prevented him from addressing the allegations in any detail, he "simply was not involved in the disposition of the matter."

"While the anonymous allegations are untrue, they have proved a significant distraction to both the legislature and the Guard as they continue their important work on behalf of all Vermonters," Farnham wrote. "I am unwilling to allow that distraction to continue."

Farnham was one of at least three candidates vying to succeed Michael Dubie as the next adjutant general of the 4000-member Vermont National Guard. The Vermont Legislature is scheduled to select the Guard's next leader in a secret ballot scheduled for Feb. 21. Farnham and Air Guard Brig. Gen. Steven Cray, another leading candidate, have been fixtures at the Statehouse in recent weeks as they've lobbied lawmakers for support.

Farnham's candidacy has been on the rocks for at least a week, as legislative leaders have digested the contents of the anonymous two-page letter, which was first sent to the writer's state representative. Both Farnham and the letter-writer met with at least two House members last Wednesday in the Statehouse to discuss the situation, according to several people close to the situation.

Seven Days obtained the letter late last week and spoke with its author, but that person declined to speak on the record. The paper was unable to independently verify the allegations included in it.

In the letter, its author wrote that she was sexually assaulted by a senior Vermont Guard officer in December 2007. She said she disclosed the situation to Maj. Gen. Thomas Drew, who subsequently informed Farnham, one of her supervisors — but that neither took action to report the incident up the chain of command.

The letter writer said she remained in touch with Farnham about the situation over the course of a year and informed him of repeated harassment and bullying she received from the perpetrator and his friends during that time. When she eventually decided to report the situation herself, she wrote, an investigation found that the perpetrator had allegedly committed other sexual assaults.

The letter's author says the perpetrator was given a verbal reprimand and reassigned, but she says Farnham continued to advocate for his promotion as recently as last summer.

Citing privacy restrictions, a spokesman for the Vermont National Guard declined Monday to address specific questions about the alleged incident and the Guard's response, but provided a written statement from Drew, who is currently serving as interim adjutant general.

"It is very difficult to respond to an anonymous letter that was given to the legislature during the course of the race for adjutant general," Drew wrote. "Vermonters in the Guard are fortunate to have several highly qualified and respected individuals willing to serve."

Drew continued, "All allegations of sexual misconduct are taken seriously and we do our utmost to follow [Department of Defense] policies and regulations to ensure the safety and security of our personnel and their work environment."

While Farnham retired from the Guard in March 2011 after 34 years of service, he remains a civilian employee, serving as vice director of the Guard's joint staff. In his statement to Seven Days, Farnham said he handled "hundreds of other employment matters."

"In every one of those matters, it has been of paramount importance — to the affected employees, to me and to the Guard — that everyone involved be treated with respect and dignity," Farnham wrote.

"I have always encouraged individuals to exercise their rights and report concerns to their chain of command or to the Guard employees specially trained to address those concerns. While the resulting employment decisions have inevitably displeased some employees, I have always worked to ensure that those decisions are not only consistent with the facts and with Guard regulations, but are also fundamentally fair and just."

Smith’s leadership team had been engaged in arranging an unusual public hearing during which the letter writer and Farnham could have presented their cases.

“It was a personal decision on his part made after thinking about what going through the process would look like, and I respect his decision,” Smith said.

Though never officially scheduled, the hearing was to take place next week before the House Committee on General, Housing and Military Affairs, according to its chairwoman, Rep. Helen Head (D-South Burlington).

Head, who had been in touch with both Farnham and the letter writer, said the latter was willing to shed her anonymity in order to appear at such a hearing.

“We took the allegations seriously,” Smith said. “We were trying to find a way to respect both the allegations and Gen. Farnham’s rights as well, which was not as easy as one might think.”

Rep. George Till (D-Jericho), who also took part in discussions related to the letter, called Farnham’s decision to exit the race “an honorable thing of the general to do.”

“I think my reaction is that it will be good if the Vermont National Guard does not get dragged through a public airing of this issue,” Till said. “His withdrawal is in the best interest of the Guard.”

Head said she was disappointed in Farnham’s decision.

“I’m sad about it. I’ve known him for a few years and I know him to be highly regarded by his peers in the National Guard and the community,” she said. “I’m sad that he felt he needed to leave the race.”

Seven Days will continue to report on this developing situation both online and in Wednesday's print edition.