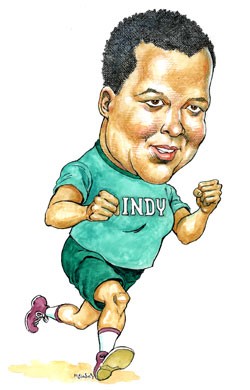 A year after launching her unsuccessful bid for mayor of Burlington, Wanda Hines is leaving city government for a job in the nonprofit world.

Hines was mum about her plans, but Mark Gadue, treasurer of the Joint Urban Ministry Project, confirms that she'll be joining the Burlington-based interfaith organization as program director.

"We're obviously excited about it," Gadue says. "It's a big step for us. We've been mostly an all-volunteer organization, for the most part."

Hines, who previously ran the Chittenden Emergency Food Shelf, has worked at City Hall since 2007, when former mayor Bob Kiss hired her to direct the Social Equity Investment Project.

"We're sorry to see her go," says Community and Economic Development Office director Peter Owens, who praised her for "fighting for and raising issues within diversity and cultural competency" in Burlington.

"She's done her work and feels like she's moving forward to a new challenge and opportunity," he adds.

Owens says the city does not plan to immediately replace Hines. He said he'd wait to hear recommendations put forward this spring by the Diversity and Equity Committee, which was established by the Burlington City Council last July to study diversity issues in city government.

"It will not be filled until we have a clearer idea of where we're going," Owens says.

Hines, who ran for mayor as an independent last March, won 5 percent of the vote.

She says she's looking forward to announcing more about her new job next week.