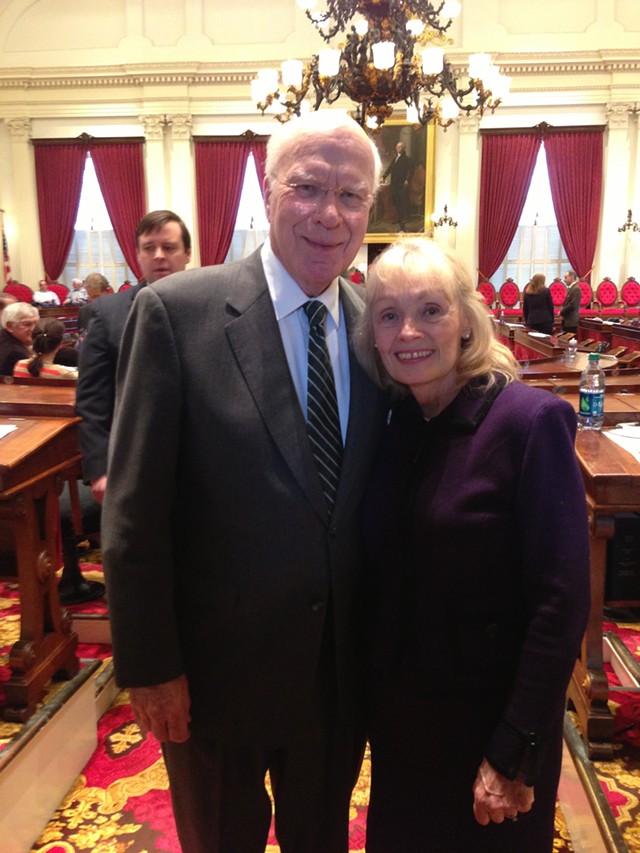 "It's hard to tell, but I would think there are a couple things people ought to be able to agree on. One is to close the gun show loophole," Leahy said in a phone interview from his Washington, D.C. office. "I would hope that most people would think whatever the rules are, they should be the same for everybody."

Leahy (pictured at the Statehouse last week with wife Marcelle Leahy) was more restrained in his reaction to Obama's proposed ban on assault weapons.

"I haven't seen how he describes it," Leahy said. "I'd like to see what it is. It's like if someone came to you and said, 'I have a car to sell you. Do you want to buy it?' You might say, 'Is it four-wheel drive? What kind of car is it?'"

As chairman of the Senate Judiciary Committee, Leahy will play a key role in designing any new gun-control laws. He announced earlier Wednesday that he'll hold hearings starting January 30 to consider legislation in response to last month's deadly school shooting in Newtown, Conn.

Leahy voted for a previous assault weapons ban in 1994 and for an unsuccessful attempt to extend it in 2004. He said a focus of his hearings would be to examine whether the expired ban worked.

"One thing I'm going to ask people who testify is, 'Did it have an effect?'" he said.

A smattering of Beltway reporters have questioned whether Leahy will move as quickly on gun legislation as the Obama administration would prefer. The Washington Post's Ed O'Keefe suggested Tuesday that Leahy "could prove to be an early obstacle to the president's swift pace."

"Leahy's decision to remain at the helm of the Judiciary Committee, instead of seeking the powerful Appropriations Committee gavel, was greeted with disappointment by some gun control advocates, who worry his centrist views on gun issues will make him an insufficient advocate for bold action. Advocates blame Leahy for stalling efforts to push new restrictions after the shooting rampage two years ago that injured then-congresswoman Gabrielle Giffords (D-Ariz.).

But Leahy pushed back on that assertion Wednesday, arguing that it's essential for his committee to hold hearings to fully vet any potential legislation.

"How else do you do it? Are they suggesting we pass legislation and then find out what's in it? That's really going to fly fast in this Congress," he said.

Asked if his plan "could point to a slower process in Congress than gun-control advocates would like," as the Associated Press reported, Leahy vehemently disagreed.

"Come on! Give me some credit! Name one person who's trying to pass more legislation," he said. "I have never once held a hearing just for symbolism. I don't have the time. I put in a 75-hour week as it is."

He added, "The only way you pass something is if you have a hearing and find consensus."

In a separate interview Wednesday, Rep. Welch signaled support for Obama's proposals, saying, "They make sense to me."

"The assault weapons limitation is, in my view, a responsible step to take," he elaborated. "The big challenge there is writing a law that works. One of the problems with the Clinton-era ban was it had so many loopholes it was ineffective."

Welch said he hoped gun-rights supporters would play a constructive role in crafting a new ban to ensure that it targets criminals — not hunters.

"I want it to work," he said. "If we pass something, it's gotta be common sense, practical and useful. The goal is to keep dangerous weapons out of the hands of dangerous people."

Welch's embrace of the assault-weapons ban marks a notable shift for him. In February 2009, Welch and 64 other House Democrats wrote Attorney General Eric Holder urging him to refrain from re-instituting such a ban:

"We believe that this ban was ineffective during the 10 years it was law, and would oppose its reenactment," Welch and his colleagues wrote. "The gun control community has intentionally misled many Americans into believing that these weapons are fully automatic machine guns. They are not. These firearms fire one shot for every pull of the trigger."

Welch said Wednesday he does not regret sending that letter, arguing that the expired ban "was, in fact, riddled with loopholes." In the years since sending it, though, his position "has been affected by what I've seen happen in this country."

Welch said he's heard from many Vermonters in the weeks since Newtown who share his view that Congress must take action.

"I've found, by and large, support for taking common sense steps — even if there was a fair amount of skepticism among Vermonters of Congress' ability to draft legislation," Welch said. "This will be a big challenge for Sen. Leahy's committee when they take this."

Photo of Leahy by Paul Heintz