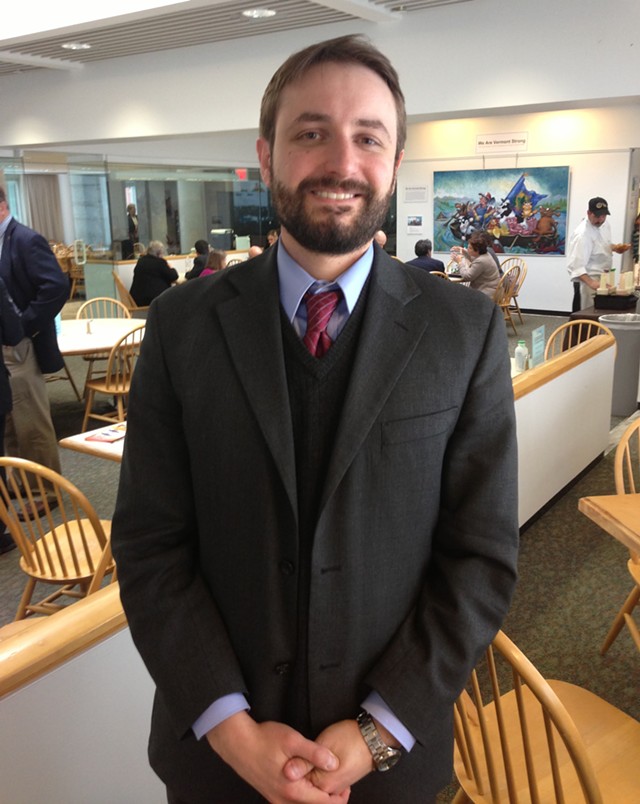 UPDATED below with comment from Councilor Max Tracy, who says Progressives will contest the seat.

Citing a new job and family obligations, Burlington City Councilor Bram Kranichfeld (D-Ward 2) said Wednesday he will not run for reelection in March.

Currently a deputy state's attorney in Chittenden County, Kranichfeld was hired last week to serve as executive director of the Department of State's Attorneys' and Sheriffs' Association. He and his wife, Erin, are expecting their first child in July.

"It really has been an honor and a privilege to serve the residents of Ward 2 for years on the council," Kranichfeld said, during a brief break from meeting and greeting lawmakers Wednesday at the Statehouse. "I'm saddened to leave the council."

Kranichfeld said he spent the weekend agonizing over the decision, but ultimately decided he couldn't juggle all the responsibilities he was facing.

The new gig, he said, "is going to require a time commitment that I think is not going to be compatible with the time the council and Ward 2 demands."

With a child on the way, he said it would be "irresponsible" to re-up for another two-year term in March.

Kranichfeld was first elected to represent his Old North End district in a special election in March 2010. He lost a bid for the Democratic nomination for mayor in 2011. Kranichfeld said he enjoyed public service and isn't counting himself out for a comeback one day.

"Hopefully at some point in the future I can do that again," he said.

One of seven Democrats on the 14-member council, Kranichfeld's departure provides a prime opportunity for Progressives to field a candidate in a ward that has traditionally been receptive to both Progs and Dems. Progressives currently hold three seats on the council. Kranichfeld said that, having just made up his mind Tuesday, he knew of no Dems seeking to replace him.

Kranichfeld has worked in the Chittenden County state's attorney's office since 2007. His new job will entail coordinating between all 14 such offices and 14 sheriffs offices throughout Vermont. The state job will also entail advocating for more law enforcement resources at the Statehouse.

"I'm deeply committed to the work of the state's attorneys and sheriffs," he said. "I've been doing it for six years now and I saw this an opportunity to continue doing that."

“Absolutely. No question,” Tracy says. “We will absolutely have someone and we’ll have a strong candidate. Because this has just become official, we obviously don’t have someone right now.”

Tracy, who serves alongside Kranichfeld in Ward 2, says the opening is a “game changer,” citing Progressives’ historical electoral success in the area.

“Folks in the ward generally tend to lean Progressive — or at least are open to a Progressive message, whereas in other wards in the city the word ‘Progressive’ might be a nonstarter,” Tracy says.

The party had not planned to challenge Kranichfeld, Tracy said, because “he’s been pretty good, if you look at this record.”

“I appreciated the fact he was willing to serve in such a nonpartisan way,” Tracy says. “I really enjoyed working with him.”