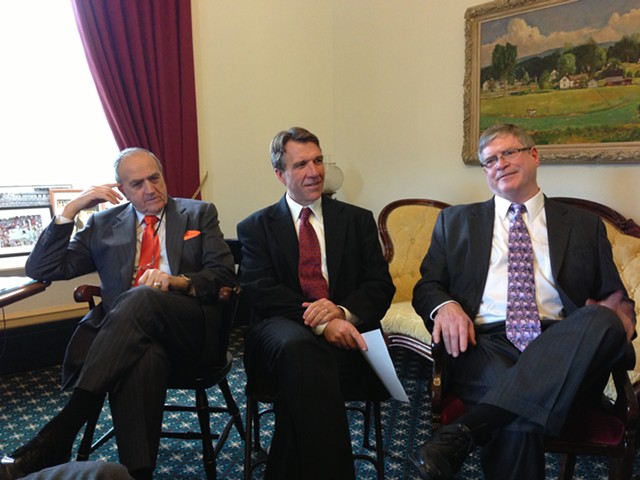 In a dramatic overhaul of the leadership of the Vermont Senate, a top panel announced Thursday that six of the body's 11 committees will be led by new chairmen.

"The appointments are some of the most creative we've seen in years in the Senate," said Senate President Pro Tem John Campbell (D-Windsor) in a press briefing shortly after the announcements were made. He was joined by Scott and Sen. Dick Mazza (D-Grand Isle), who collectively made up the "Committee on Committees," charged with assigning colleagues to the 11 panels.

(Mazza, Scott and Campbell are pictured above, l to r.)

Among the biggest changes?

The selection of Ashe to chair Senate Finance appears to be a rebuke to Shumlin, who allegedly lobbied for Sen. Dick Sears (D-Bennington) or Sen. Mark MacDonald (D-Orange) to lead the committee. As Shumlin looks toward funding his health-care overhaul while avoiding raising broad-based taxes, several senators said the governor was worried whether Ashe would toe the party line.

But Mazza, whose committee selected Ashe, said pressure from the governor's office had no impact.

"You can't base a decision on what the governor is wanting," Mazza said. "You can't be swayed by pressure from I don't care what administration."

Ashe said he wasn't convinced Shumlin was lobbying against him.

"What I do know is that I've worked well with the governor both when he was the President Pro Tem and also as governor," Ashe said. "I'll continue to be the independent but collegial partner that I've always been. I don't know that he played that type of role. I think he knows it's inappropriate to intervene at that level."

MacDonald and Sears, who both angled for the Finance job, said they weren't happy to lose out, but would surely get over it.

"Of course I was disappointed with Finance, but you take those disappointments in stride," MacDonald said as he left the Senate chamber. "That's the prerogative of the Pro Tem."

Said Sears, "Yeah, I mean, I woulda loved to be chair of Finance or chair of Appropriations, but it wasn't in the cards this time around."

Lyons, who was not present for the announcement, said earlier in the day that, "there aren't really legitimate reasons" to bump her off Natural Resources, except, she said, "They're looking for someone who's less environmental."

Calling Lyons "an incredibly bright woman," Campbell said he simply thought it was time for a change on the committee.

Campbell, Scott and Mazza each said that the selection of Hartwell as chairman of Natural Resources was not motivated by his support for a ridgeline wind moratorium. Campbell and Scott both support a temporary ban, while Mazza said he's a "supporter of wind energy" and hasn't taken a position on a moratorium.