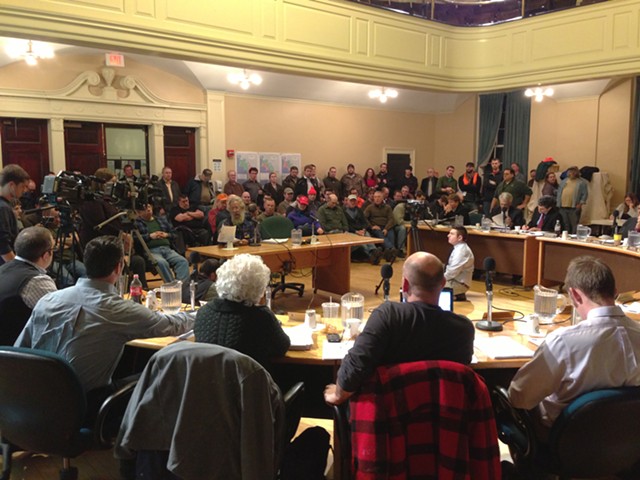 With an aggrieved crowd of gun owners looking on, the Burlington City Council took a first step Monday night toward banning assault weapons and high-capacity clips in the city.

By a vote of 10 to three, the council instructed the city's charter change committee to draft language barring the possession of such guns and ammunition in Burlington and calling for their "immediate seizure by the police."

The vote was merely a first step in a long process that would require yet another vote by the council, public hearings, a referendum and, ultimately, a vote in the legislature to change the city's charter. Nevertheless, to the nearly 100 Vermonters who showed up to the meeting — nearly all men and many wearing camouflage or blaze orange — the proposal was clearly received as an affront to their right to bear arms.

"There's no excuse why we have this ordinance here other than to politicize something that's a knee-jerk reaction," said Burlington resident Michael McGarghan, one of 25 members of the public who spoke out against the proposal during the meeting. "I'm really disgusted that I had to come here tonight and take time out to talk about this."

Opponents of the ban cited protections in state and federal law they said prohibited such an ordinance. They said lawmakers should focus on improving mental health services and addressing a culture of violence. And they said banning a particular type of weapon was a fruitless endeavor that would do nothing to curb violence.

Arguing that more people are killed each year by baseball bats and automobiles, gun rights supporter Roger Farnsworth said, "Maybe we ought to ban cars and ban baseball bats. That would be the admirable thing to do."

Lifting up his shirt to show city councilors the scars of a gunshot wound, Chris Brown said he was shot twice in a 1986 incident in the Burlington Town Center Mall parking garage.

"The point I want to convey is I don't blame it on guns," Brown said. "I blame it on the person who shot me."

Emotions ran high on both sides of the debate, which was monitored by a pair of uniformed police officers posted outside Contois Auditorium. Council President Joan Shannon (D-Ward 5) was brought to tears recalling the shooting death by handgun of an 18-year-old who lived with her family.

Shannon was one of five Democrats to support the measure, which was written by Councilor Norm Blais (D-Ward 6). They were joined by Progressives Vince Brennan (Ward 3), Rachel Siegel (Ward 3) and Max Tracy (Ward 2), along with independents Karen Paul (Ward 6) and Sharon Bushor.

Blais and fellow supporters of the ban said that because the charter change process involves so many steps, "there's nothing rash or precipitous about this." They argued that an affirmative vote would simply start a city-wide conversation they said was overdue following the massacre of 26 people last month at a Connecticut school.

"In the absence of federal legislation and state legislation, we're left with a sad situation: That if we're going to act, we have to act locally," Blais (pictured below) said.

Other Democrats supporting the bill took great pains to mention their own use and ownership of guns.

After noting that he owns several firearms and frequents shooting ranges, Councilor Bram Kranichfeld (D-Ward 2) said, "Having said all that, I have a hard time with assault weapons. I don't think there are enough legitimate uses of assault weapons that justify the risk they create. You can use them for hunting, but you don't need them for hunting. You don't need them for home protection."

Hartnett, on the other hand, echoed Farnsworth's sentiments, noting that a Burlington school was locked-down earlier in the day when an Allen Street woman threatened to cause an explosion by leaking gas in her apartment.

"So what's next? A ban on natural gas?" the conservative Democrat asked. "It's not guns. It's the individuals that are getting these guns. We've talked about mental illness. That is the issue here."

Several councilors sought to amend the proposal, some with success. With Blais' support, Kranichfeld successfully moved to change the language of the bill to refer to "assault weapons," not "semi-automatic assault weapons" — and "high-capacity clips," not "multiple ammo clips."

Brennan, meanwhile, successfully amended the measure to call on the Vermont legislature to "address the issues of gun violence" with President Obama and the federal task force he established after the Connecticut shootings. Brennan's amendment asks the legislature to consider the licensing and permitting of handguns, mental health issues and violent video games.

Decelles, an opponent of Blais' resolution, was unsuccessful in swapping it out for a measure simply calling for public hearings geared toward making Burlington schools safer. But later in the meeting, the amendment was revived by Councilor Paul, who successfully moved to add it to the underlying resolution.

Democratic mayor Miro Weinberger, who stayed quiet through most of the meeting, read a brief statement near the close of the debate offering support for Blais' proposal.

"I support charging the charter change committee with and the public safety committee with the responsibility of exploring what action Burlington can take to have an impact on this issue," he said. "We must balance the issues of gun violence with our Vermont culture that, for many, includes the responsible use of firearms."