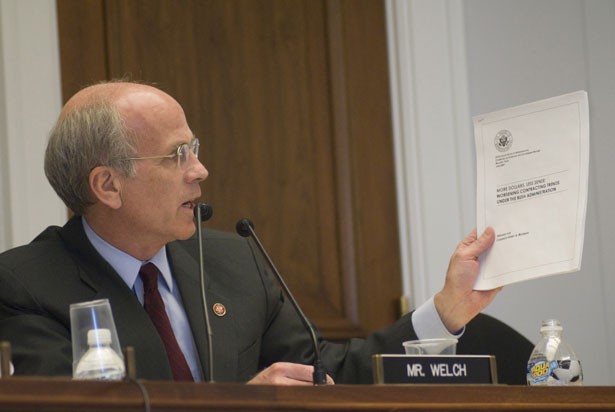 Vermont's congressional delegation will have new clout on Capitol Hill next term thanks to a couple of promotions bestowed upon the three-member team.

Sen. Bernie Sanders' (I-Vt.) office on Wednesday confirmed earlier reports that he's been named chairman of the Senate Veterans' Affairs Committee. That's the first chairmanship Sanders has earned during his more than two decades in Washington.

Majority Leader Harry Reid (D-Nev.) appointed Sanders to the post after promoting its current chairwoman, Sen. Patty Murray (D-Washington), to head the Senate Budget Committee. Sanders was the next-highest-ranking Democrat-aligned member of the panel not already chairing another committee.

"It is a great honor to be named chairman of the committee, but it is an even greater responsibility," Sanders said in a written statement. "We owe it to the over 22 million brave veterans living in the United States to provide the benefits that they have earned and deserve."

On Thursday, Congressman Peter Welch (D-Vt.) announced that he's reclaimed his old seat on the powerful House Energy and Commerce Committee. Welch was first tapped for the committee in 2009, but was bumped after the 2010 election, when Republicans took over the House and claimed a majority of seats on each panel.

Welch was also named by House Minority Leader Nancy Pelosi (D-Cali.) to the Democratic Steering and Policy Committee — a leadership panel that determines committee assignments and sets policy for House Dems. Its membership is dominated by those loyal to Pelosi, Minority Whip Steny Hoyer (D-Md.) and other top Democrats.

Coriell says it remains unclear whether Welch will retain his current assignments to the House Agriculture Committee and the Committee on Oversight and Government Reform.