Illuzzi in Talks to Lobby for State Employees Union | Off Message

Illuzzi in Talks to Lobby for State Employees Union 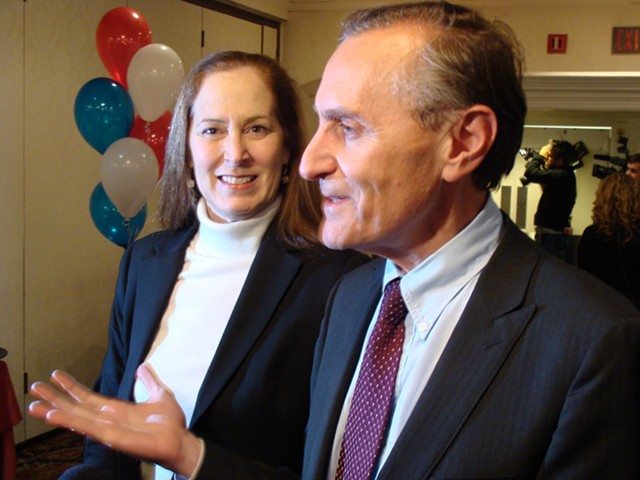 On the heels of losing a race for state auditor, Sen. Vince Illuzzi (R-Essex/Orleans) says he's in talks with the Vermont State Employees Association about a "lobbyist and legal role" at the 5200-member union.

"We're talking," Illuzzi says. "That's all I can say on the record."

The longtime state senator, who's leaving the upper chamber in January after 32 years in office, says he would not become a full-time employee of the organization; instead he'd work on a contract basis. As such, he says he'd be able to continue in his part-time elected job as Essex County State's Attorney.

"It's a contracted position that reflects I have my own law practice and serve as state's attorney," he says.

VSEA spokesman Doug Gibson confirms that Illuzzi and the union are in discussions.

"It's not formal. He's talked with us and we've talked to him. Nothing's been signed or sealed yet," Gibson says. "I know the board and [executive director Mark Mitchell] have talked with him. I'm not sure there's a formal offer on the table, but they've talked."

Gibson says another unsuccessful statewide candidate — Progressive and Democratic lieutenant governor contender Cassandra Gekas — recently turned down an offer from the VSEA to become its top lobbyist. Seven Days reported in October that she'd been offered the gig during the closing weeks of her campaign.

"She declined," Gibson says. "I don't know what happened. I honestly don't know."

Gekas confirmed Wednesday that she's heading in a different direction.

"I am not working for the VSEA," she tells Seven Days. "I have several different possibilities and I hope to have a decision by tomorrow."

Gekas wouldn't elaborate on her change in plans, saying only, "I'm out there looking for the best fit for my skill set, the things I really care about. The VSEA is a great organization and whoever's put in that position will do well by them. But it just isn't right for me right now."

Illuzzi's recruitment comes as the VSEA works to rebuild its ranks after a staff exodus this fall. Six of the union's 19 staff members left the organization during a five week period — including top lobbyist Conor Casey. Several of the employees told Seven Days at the time that they left because they were unhappy with Mitchell's leadership.

According to Gibson, Illuzzi would be a great asset for the organization.

"Vince has been a longtime friend to the VSEA," he says. "I think he'd bring a lot to the table."