Photos: Leahy and the Clintons Inaugurate Industrial Park in Haiti | Off Message

Photos: Leahy and the Clintons Inaugurate Industrial Park in Haiti

When we heard Monday that Sen. Patrick Leahy (D-Vt.) was hangin' in Haiti with Sean Penn, Ben Stiller, Donna Karan and Richard Branson — oh, and Secretary of State Hillary Clinton and former president Bill Clinton — we wanted to send our best photojournalist to get the goods.

But he was tied up trying to snag a photo of Lenore Broughton.

So we did the next best thing: We asked Leahy, an enthusiastic amateur photographer himself, whether he could spare a few photos. He obliged.

Here's a great shot Leahy captured of the Clintons in action: 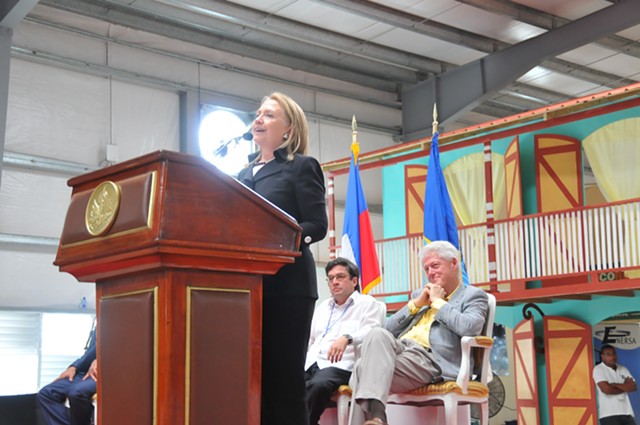 Leahy and the Clintons were in Haiti to inaugurate a new, $300 million industrial park designed to lure foreign investors to the earthquake-ravaged country. The Caracol Industrial Park, which has received $124 in funding from the United States, has been a top priority of the Clintons, as well as Leahy, who chairs the Senate Appropriations Subcommittee on State Department and Foreign Operations.

According to the Associated Press, which has a solid report on Monday's visit and the project itself, developers of the 617-acre industrial park have thus far drawn three tenants and hope to eventually create 65,000 jobs. Anchor tenant Sae-A Trading Co. of South Korea has already hired 1050 people and sent its first shipment of 76,000 t-shirts to Wal-Mart earlier this month.

"Private investment is one key to developing Haiti's economy, and this private-public partnership is intended to help jump-start this long process," Leahy said in a press statement. "This industrial park holds much promise, but there are many hurdles ahead that will test its lasting impact."

Leahy was alluding to skepticism and downright criticism the project has garnered from those who question its long-term viability, environmental impact and actual benefit to Haitians — not just foreign investors. The AP quotes one of them, Wesleyan University sociologist Alex Dupuy, who hails from Haiti, as saying, "This is: Been there, done that."

"This is not a strategy that is meant to provide Haiti with any measure of sustainable development," Dupuy continues. "The only reason those industries come to Haiti is because the country has the lowest wages in the region."

In his statement, Leahy acknowledged those challenges.

"Many decades of redevelopment efforts in Haiti have been burdened by lack of basic infrastructure and social services such as education, housing, medical care and a functioning justice system, and government corruption has contributed as well in derailing earlier large-scale projects," he said. "This project also presents environmental challenges which need to be responsibly resolved. Helping Haiti emerge will require consistent effort and oversight, and I wanted to see these latest efforts for myself."

Here are a couple more photos Leahy snapped of the event: