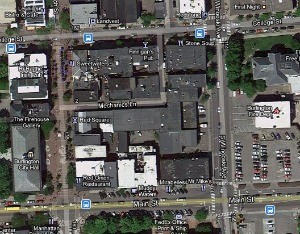 The Burlington Free Press had quite a scoop Friday morning: As business writer Dan D'Ambrosio reports, the Freeps itself is selling off $3.3 million worth of downtown real estate — the bulk of its College Street headquarters.

The paper hopes to sell 55,570 square-feet of space in seven interconnected buildings, which range from two to four stories each, according to a listing on the website of real estate broker V/T Commercial.

The Freeps will hold on to 40,000 square-feet of space in five additional buildings it owns on the block. Those include its mailroom and printing press, which was recently refurbished to the tune of $2.4 million. The paper also hopes to lease back 10,000 square-feet of office space from a prospective buyer in order to keep its newsroom and business operations downtown.

"The Free Press is committed to supporting the vibrant Burlington community and all of the Vermont communities we serve every day," Freeps publisher Jim Fogler said in a press release. "We plan to stay in downtown Burlington and lease some of the office space. This is an exciting opportunity and an attractive one for a developer to create multi-use space in this wonderful downtown location with a built-in tenant."

Fogler declined a request for an interview.

"They're committed for the long haul. They've redone their presses. As for the office part, which is what we have for sale, they just don't utilize it efficiently and they just don't need the space," Kiendl says. "They've decided they don't need to be in the real estate business. They're in the newspaper business."

News of the sale is not terribly surprising, given the Freep's diminishing staff and recent moves by parent company Gannett to divest itself of costly downtown properties it owns throughout the country. As we wrote this summer in a story about the Freeps' recent makeover, Gannett had more than $100 million worth of real estate on the market as of June.

Earlier this year, the Barre-Montpelier Times Argus put its own 23,000 square-foot headquarters up for sale in order to downsize to a 5000 square-foot office in downtown Barre. That decision was prompted by owner John Mitchell's decision to not rebuild the paper's printing press, which was damaged by flooding in the spring of 2011.

The Free Press' announcement comes on the heels of some good news from Gannett's corporate headquarters. Third quarter profits were up 33 percent and revenue increased for the first time since the fourth quarter of 2010 — by a healthy 3.4 percent.

Driving those gains, Gannett said in a statement announcing its earnings on Monday, was an increase in advertising sales at the company's television stations, thanks to political spending and Olympics coverage. While print advertising continued to shrink — by 6.6 percent — print revenues were up 5.6 percent over the same quarter last year. That's because most of Gannett's 81 papers have raised the price of subscriptions this past year and now charge for digital access.

In June, the Freeps increased the price of home delivery by $63 a year, or 31 percent.

According to the Wall Street Journal, newspaper stocks are up 50 to 80 percent this year as investors embrace the proliferation of paywalls. Gannett's own stock has stayed above $18 a share for much of the past month — up quite a bit from its 52-week low of $10.29 last November.