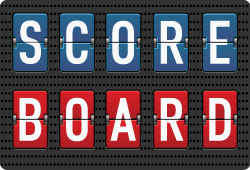 Each Friday here at Off Message headquarters, we bring you the week's winners and losers in Vermont news and politics. This week, we were a little light on winners — but there's always plenty of losers to go around.

Without further ado, we humbly present you with The Scoreboard, for the week of October 12:

Tiki Archambeau — The Burlington Progressive Party chairman put to rest the weenie liberal stereotype last weekend when he did his damnedest to beat the shit out of a thief he spotted rifling through his car. The bad guy got away, but not before the Archambeau broke the dude's nose.

Staycations — Republican gubernatorial candidate Randy Brock managed to lodge his first coherent hit against Gov. Peter Shumlin Thursday by releasing the results of a public-records request showing that Shummy spent 119 days out of state during his first 21 months in office. Granted, that includes time the gov was on state business. And, you know, the guy's entitled to a little vacay — or to cross the Connecticut River to save a few bucks on a pack of cigarettes. But still. You gotta give Brock credit for trying! Maybe next time Shummy will stick around and just go biking with Lt. Gov. Phil Scott.

David Zuckerman — It's real hard to get attention from us media types when you're running for the legislature, but Hinesburg's ponytailed Prog managed to extend the life cycle — and news cycle — of his "Democrats hate me" psychodrama for yet another week. After being spurned by Senate Democratic leadership for being too Prog-y, the Chittenden County state Senate candidate held a press conference Monday with prominent Dems who back him, including former governor Phil Hoff, former House speaker Gaye Symington and Chittenden County State's Attorney T.J. Donovan. And, of course, a couple of us media sheep attended.

Vermont Leads — Say what you will about the conservative super PAC Vermonters First, but the decision by the single-payer advocacy group Vermonters Lead to picket outside the Burlington home of the super PAC's sole funder, Lenore Broughton, was pretty shabby. There are better ways to make your point than to hassle someone at their house. It only drives home the point that while the conservative super PAC appears to be solely funded and operated by Vermonters, the single-payer group isn't.

Television viewers — New ads released this week by a liberal super PAC and Republican AG candidate Jack McMullen are, well, kind of bad. The former — an ad by Priorities PAC backing Democratic State Treasurer Beth Pearce — has terrible production values and keeps saying something about Pearce going to Wall Street. Which is weird. The latter, meanwhile, features a peculiar photo of Fred Tuttle and never actually says the name, "Jack McMullen" in the script.

Voters — The city of Burlington screwed the pooch this week, sending out some 523 faulty ballots to early voters with an incorrectly worded ballot question. Whoops! Separately, the U.S. Department of Justice is suing Vermont for failing to get 20 percent of ballots requested by members of the military and others living oversees in time to meet the 45-day federal deadline. Double whoops!

Astroturfers in the comments section — Green Mountain Daily's John Walters on Sunday picked up on some rather hilarious comments left below a VTDigger.org article about Shumlin's real estate doings. In what appears to be a rather clumsily coordinated campaign, several commenters used nearly identical language to hate on Digger. One even said he'd "no longer be buying your paper at local stores which will hurt the local economy." We're guessing the online-only Digger is pretty worried about that.