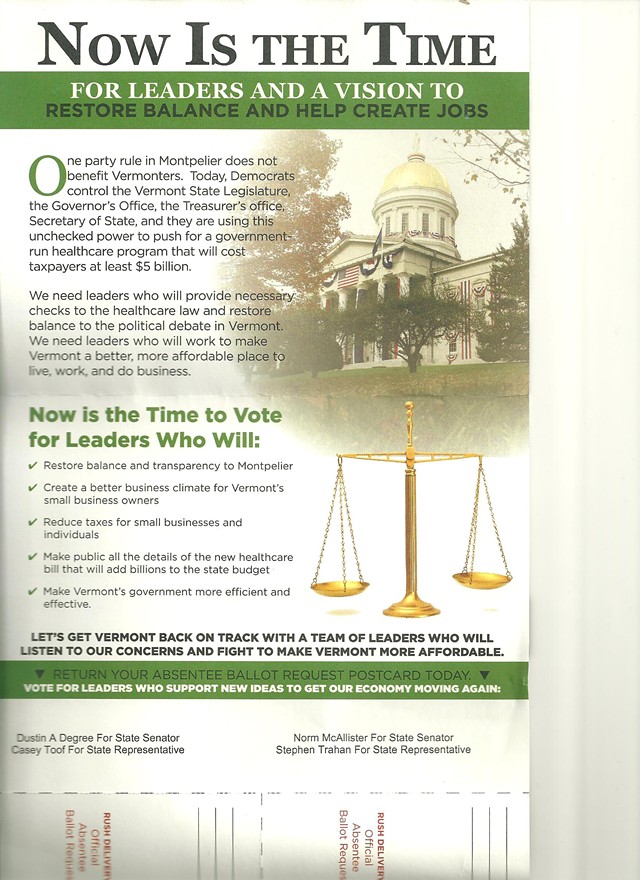 For weeks, the group has filled the airwaves and mailboxes with advertisements opposing "Democrats" generally and supporting two statewide Republican candidates specifically. But mailers and robo-calls sent to homes in St. Albans, Colchester and elsewhere in the state late this week focused newly on candidates for the legislature.

A nearly identical piece hit Colchester Friday, though it called on voters to back Republican House candidates Bob Bouchard and Joey Purvis.

"One-party rule in Montpelier does not benefit Vermonters," it reads. "Today, Democrats control the Vermont State Legislature, the Governor's office, the Treasurer's office, Secretary of State, and they are using this unchecked power to push for a government-run health care program that will cost taxpayers at least $5 billion."

The names of the candidates the super PAC is supporting are in small print at the bottom of one side of the piece. It also includes an absentee-ballot request form.

Tayt Brooks, the group's treasurer, consultant and sole spokesman, did not return calls seeking comment Friday — but two of the candidates backed by the group did.

"It is what it is. I think it's politics as of 2012," said Degree, who is hoping to trade his seat in the House for one in the Senate. "I think in Vermont we like to try to do things a little different, and I think that's OK. But the Democratic Party has a lot more money than the Republican Party does."

"I do like that this PAC is bringing some balance to the conversation," he added.

McAllister's feelings on the mailing were a little more mixed.

"I'm a little uncomfortable about people writing things for me," he said, recalling a previous campaign he ran for the House seat he now holds. "I know how I felt when the shoe was on the other foot. Big money came in and started pushing my opponent and I was working on a shoestring."

Both candidates said they are friendly with Brooks, a fellow Franklin County resident, but have avoided speaking with him about their campaigns or the super PAC he runs, so as to comply with campaign finance rules barring coordination. McAllister said he and Brooks shared an apartment in Montpelier during the legislative session for roughly five years when McAllister was in the House and Brooks served as a lobbyist and then in the Douglas administration.

"But I sure as hell am not calling Tayt now," McAllister joked.

"I'm frustrated," Charyk said. "I don't think these tactics will work, and I don't think it's fair that one person can put this much money into local elections. Our candidates on the ground are going door-to-door. I think that's how you win legislative races. And that's how my candidates will win their seats."