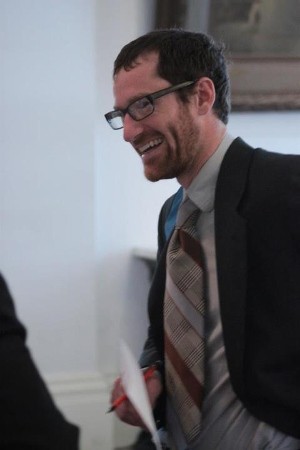 When I asked VTDigger.org reporter Alan Panebaker in June why he was leaving the online news outlet to take a job at American Whitewater, his answer was simple: "It's just a really sweet opportunity because I'm really focused on white-water kayaking."

An avid kayaker since age 12, Panebaker told me the new gig advocating for river conservation and access was "a dream job." After I wrote a short item about his departure, he sent me a joking email demanding a correction:

See you on the river, brah.

Panebaker died on the river Wednesday — the West Branch of New Hampshire's Pemigewasset River — doing, as his former boss Anne Galloway wrote, "what he loved best." Galloway and New Hampshire Public Radio report that Panebaker and two other experienced kayakers were paddling a steep, narrow gorge near the Pine Sentinel Bridge in Franconia State Park when Panebaker's boat became stuck between rocks, causing him to go under.

A 2005 graduate of the University of Montana School of Journalism, Panebaker worked for newspapers in Oregon and Alaska — and freelanced for Canoe & Kayak magazine — before heading east to attend Vermont Law School, according to a Digger bio. After passing the bar, Panebaker opted to return to journalism briefly, becoming Digger's first full-time reporter last fall.

I wish I could say I knew the 29-year-old Montpelier resident better than I did. Much of what I know comes from reading — and admiring — his work during last year's legislative session covering energy and health care issues for Digger. It was phenomenal stuff. Panebaker's dogged coverage of a major electric utility merger made clear that he could deconstruct a complex, wonky subject for his readers — and make crystal clear why it matters.

As word of Panebaker's passing spreads throughout this little state, the tributes from politicians, activists and fellow reporters are flowing in. But I think Galloway puts it best, in her understated manner, when she writes:

He was a bright and talented man who had a keen sense of humor. He had a great work ethic and a sense of integrity. He will be greatly missed.

Seven Days sends our condolences to Alan's family, his girlfriend Magdalena Dale, his dog Buddy, VTDigger and all those who worked closely with him.

See you on the river, brah.