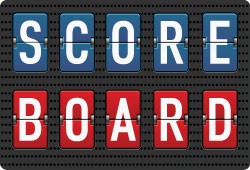 Every Friday here at Off Message headquarters, we bring you the week's winners and losers in Vermont politics and news. After scouring the state for conventional wisdom, we run it through our sophisticated, proprietary algorithm, shake it up and add a few ounces of Heady Topper. Then we splatter it upon the internets.

Now, without further ado, we bring you The Scoreboard, for the week of Sept. 14.